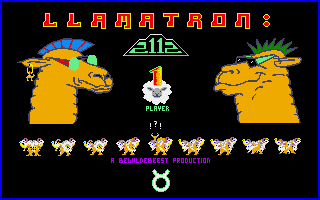 Jeff Minter's 1992 shareware game Llamatron: 2112 features an easter egg that can be enabled to activate swearing when you die near the end of a level.

Llamatron was the first AGA fixed hard drive installer that I ever wrote for WHDLoad back in the late 1990s, and it was chosen as I thought it'd be quite an easy install to begin with. The original game did not quit back to Workbench nor did it save the high scores, hence it was worth patching.

To save high scores, you have to find the code that runs just after entering your name into the high score table, and insert a small patch that saves that relevant chunk of memory to disk. When the game first loads, you simply check if the high score file exists, and if so, load it over the top of the original high score table.

While finding the safest place to install the save routine, I discovered the following code:

The game searches the name that was entered for the sequence "FUCK", and if found, sets a specific memory location to 1. I mentioned this fact in the Llamatron WHDLoad installer, but left the surprise for people to discover themselves if they read the note. I added the easter egg to the Sweet Cheater database that Keith Krellwitz began years earlier, and got on with patching hundreds of other games. Years later, I also added the easter egg to the Hall of Light entry, and pretty much forgot about Llamatron.

Recently I remembered the easter egg I had found for the game, and wanted to know if anyone else had discovered it. There did not seem to be anything on the internet about the Amiga version at all, but there were quite a few mentions of the original 1991 Atari ST version. Someone had apparently hacked the game to enable the swearing, so people were certainly aware of easter egg in the Atari ST version.

The most useful discovery occurred when I found an article called The Making of Llamatron: Diary of a Classic by Jeff Minter (originally published on Way of the Rodent). In particular, the following section regarding the Atari ST game:

Towards the end of the game's development, my mates came up for the weekend and we spent a good amount of time playing the near-completed game and indulging in beer and the occasional recreational cigarette. One thing we noticed was that whoever was playing would frequently swear quite vehemently when killed. I noticed that people would be particularly inclined to swear if it was near the end of the level where one might have hoped to survive - so, I thought, why not have the game swear for you?

Of course I couldn't have the release game swear or I'd be letting myself in for a world of "disgusted of Tunbridge Wells" hurt. However I could make it partially swear. So I gathered my mates round a tape recorder and we sat down to swear together. At first it was just a good, heartfelt chorus of "Oh, fuck!". What I planned to do was time the sample playback so that it'd go "Oh, f-" and then another sample would kick in. Recording that was fairly simple, and I hooked it into the game and it worked pretty well.

That wasn't enough though. I thought I might as well produce a little private version for us to play which featured some full-on cursing. I figured that since this one wasn't for release I could use one with more than 1M of memory, and use more memory for samples. We sat around and had a couple more recreational cigarettes and worked out a list of choice phrases from which the machine could choose when it came swearing time. The script we worked out called for the following: "Bollocks! Pissflaps! Cunt, cunt, cunt, cunt, cunt! Fucking shit! You bastard! Fuckpig!". And we all gathered round the tape deck to swear together again.

The trouble was that by then we were all pretty much in a silly giggly mood, and it must have taken a couple of hours of takes during which we'd lose the plot and end up laughing like bastards before we got the take just right.

The end results were, in a rather puerile way, excellent. Upon swearing being deemed necessary, the program would choose one of the phrases and utter it. Occasionally it would launch into "tirade mode" and emit the whole lot in one foul-mouthed stream. I eventually sent a copy of the rude version to my mate Richard Miller, who was working at Atari in the US at that time. He told me that when he put it on his office TT and started to play his secretary heard the game and came in to look, attracted by the cute baaing and mooing and "I Love You!" noises coming from the game. Just as she arrived Richard lost a life, and the game chose to go into Tirade Mode whereupon she rushed out of the room, sorely offended and, for all I know, never to return.

Llamatron trivia (swearing-related) - I *did* get one "disgusted of Tunbridge Wells" letter, albeit a mild one. The release version contained the whole "Oh, fuck!" sample, but the game was set so that a certain time after that sample was triggered, another explosion sample would be triggered, cutting off the swearing appropriately. But Mr. Mildly Disgusted had discovered an oversight - if you hit Pause in between the time the swearing was triggered and before the obscuring explosion was triggered, the whole "Oh Fuck!" sample would get played.

On the Atari ST, if you pause the game at the correct time, you can hear the "Oh fuck!" sample as the code that was supposed to play the explosion sound effect over the top of the swear word would not execute.

On the Amiga, Jeff Minter must have decided to include the easter egg "properly" for those of us that used to put swear words into the high score table. You can replicate this easily yourself by playing a game and getting a high score, typing "FUCK" as part of your name, then starting another game. If you die with less than 10 enemies remaining on the screen, the "Oh fuck!" sample will play every time.

Sensible Software added a secret message to the end sequence of Cannon Fodder, and a second to the publisher logo.

A deleted end sequence, and the amusing startup-sequence for Final Fight, all written by Richard Aplin. Remember Line Of Fire? Here we go again, crackers! Fill in the blanks...