An interview with Ricardo Puerto 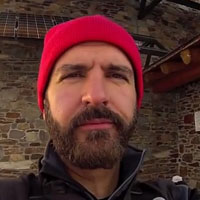 Ricardo Puerto programmed the Amiga game Risky Woods for Dinamic back in 1992. From a technical viewpoint, the game is fondly remembered for the amazing sprite trick that was used to create a smooth scrolling 16 colour parallax layer behind the action. I believe it was the first commercial Amiga game to use this particular technique.

At this stage in the Amiga's life, most games used dual playfield mode to create a parallax layer, which allowed 2 independently scrolling playfields of 8 colours each (one being transparent). 16 colour sprites were often used for the player, but the games often had rather bland enemies as they had to all share the same 8 colours as one of the layers. Examples of this include Soccer Kid and Wolfchild.

Ricardo opted for a different technique, with a 16 colour screenmode for the game, and using all 8 sprites (in 16 colour mode) multiplexed across the screen multiple times to display a 64 pixel wide pattern.

Raál López was the graphic artist that did a wonderful job considering these limitations.

One of my contacts alerted me to the fact that Risky Woods shares a similar game style and look to an old Amstrad CPC game called El Capitán Trueno? Was Risky Woods some kind of unofficial sequel to that game?

Raál worked also as a graphic designer for El Capitán Trueno, hence the similarities, but nothing to do with Risky Woods otherwise.

Did you personally write any part of El Capitán Trueno or base Risky Woods on it?

I didn't work on it at all as it was a game developed by a completely different team. Raál joined only for this game. 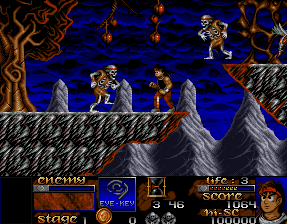 Was Raál working with you from the very start of development of Risky Woods then?

And was Risky Woods the only Amiga game you ever made?

Yes, it was the only game.

Approximately how long did it take to program?

Do you have any idea about sales figures for the game? Was it a big hit?

I don't remember, but it sold well.

Who actually came up with the idea for Risky Woods then? Was it a tech demo you expanded into a full game?

No, as usual we played with different things, first at the graphic and technical level and then decided about the gameplay and story.

What development system did you use for Risky Woods?

We developed on Amiga, no hard drive, no additional hardware.

What model of Amiga? (Hopefully something more than an A500 with more than 1Mb!)

Basic A500s without HD, only floppies! 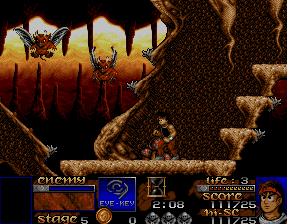 How did you decide on the main screen setup of 4 bitplanes (16 colours)? Was it done so an Atari ST version could be created more easily?

We never had ports in mind when developed new videogames, only tried to squeeze the hardware as maximum as possible and then porting as close as possible to the original, trying to benefit from new hardware when possible.

I'm not sure of any Amiga game prior to Risky Woods that scrolled an entire 16 colour parallax layer using only sprites. How did you come up with the amazing repeating sprites trick for the background on each of the levels?

I don't think I spent much time on it. I already had a very good background on beam syncing since the Spectrum times, so the idea came very easily. Only a matter of make it work and time the code to see if it was viable or not.

It almost looks like the repeating sprite trick was the basis for the game as just over 70kb of the memory is used for preshifting the background graphics and the copperlist. Was this just a co-incidence as the Amiga sprite hardware allowed that or did you consider bumping the game to 32 colours on the Amiga?

I don't remember that. Probably we chose 16 colours because 32 colours was out of the norm. I mean, it looked like a hardware feature that didn't give too much compared to the increase in graphic memory and the loss of copper tricks.

Did you do the ST version yourself at the same time or after the Amiga version was finished? 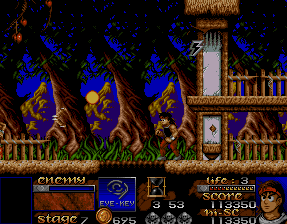 Did you work in-house at Dinamic or created the game at home and simply published via Dinamic?

At home. We had our own offices and worked primarily for Dinamic but not exclusively.

How did you get the publishing deal with Dinamic?

We worked for Dinamic since the early years of 8-bit games. We were friends and had a very good relationship in general.

Did you approach them in advance saying you were going to write Risky Woods for the Amiga and would they be interested in publishing it etc? Or did you ask around other publishers aswell?

We developed the game on our own and then approached Dinamic first but with the idea in mind of listening to other offers, but they were very interested from the beginning.

Many Amiga fans (including myself) think Risky Woods is the only decent game ever made by Dinamic, as they seemed to publish an awful lot of terrible games such as Army Moves, Navy Moves, Freddy Hardest etc. What do you think about this?

Risky Woods was published by Dinamic but entirely developed by us under the Zeus Software signature.

Nicely avoiding the question there! :) Does that mean you agree with me and think the rest of the Dinamic games on the Amiga were rubbish?

Yeah, Dinamic wasn't in its glory at the time and those games were basically 8-bit ports. There were a couple of decent ones, like Astro Marine Corps, but also were developed externally, AMC by Pablo Ariza. 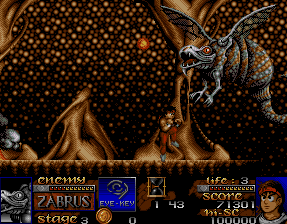 What did you think about the reviews of Risky Woods? Did you read all of them or collect any special reviews?

I don't usually read reviews or interviews unless somebody points me to them, so thank you very much for the link. Very interesting to see there are 17 game reviews!

How did Raál cope with the limitations you gave him for the game? ie. 15 colours max for the game (one being black), 15 colour sprites that could only be 64 pixels wide repeating, memory constraints for all the tiles/baddies etc. Was Raál a technical guy?

Not a technical guy at all, but he knew his job very well as we started together developing for 8-bit platforms, where the constrains were even bigger, so we didn't see limitations but plenty of freedom.

Straight after finishing Risky Woods, did you create the arcade game Biomechanical Toy? And how did you end up working on a coin-op?

Yes. We always wanted to work on coin-ops and after finishing Risky Woods we saw the oportunity to work with Gaelco so we started developing for their system.

There was also a small game for a theme park called Last Km which you probably won't find any info for.

How many of you worked on the game?

I programmed and Raál designed as usual, but this time we worked with some other people. Two designers who made a huge amount of hand drawings, a third one who did some, and one programmer for game tools.

Can you explain a bit more about this Last Km game you worked on? Did you write it by yourselves?

Yes we did. We did it very quickly. It took us one month to complete. It was designed for two boards set in static bikes and connected by a cable. There was two people playing at the same time, one against the other, or one player against the computer. You had to pedal all the time as the biker was moving from different terrains, from quite flat to very steep. The steeper the terrain, the harder you had to pedal. And there was an entire group of bikers also trying to win. As a game for a theme park, it was interesting in that context.

About the graphical part, Raál and the two Toy designers took a camera one day and went through the San Sebastian Bay area (our city) taking pictures of everything, from walls to traffic lights, etc. and then scanned and retouched everything pixel by pixel. A huge amount of work done fantastically well and quick.

What are you doing these days?

Currently I'm working as IT Director for a translation agency.

My personal website is rpuerto.com, but nothing to do with games, mostly mountaineering and travels.

Thank you very much for your time!