New Zealand users were in a fortunate position during the 1990s. The governement had privatised the telecommunications industry but added a stipulation that said all local calls must be free for everybody that had a home phone line. A land-line cost about $35-$40 a month back then, but not having to pay for local calls made dialling up to BBSes a very attractive proposition!

Many parents had their home phone lines permanently engaged during the evenings and weekends as teenagers with modems were dialling out to download the latest stuff. There were many heated discussions about why someone had picked up the phone without checking if the modem was in use, cutting off the latest download with only seconds to go! "Why didn't you check I wasn't on the phone before you picked up the phone!". The standard reply was "I pay for the phone. Why don't you pay for your own bloody phone line!"

Those were the days...

There were a few "elite" boards (Shark Island, S.A.R., Kiwiland) where a fair number of the latest Amiga games were imported into NZ. These guys were often blue-boxing or using stolen carding calls to bypass paying for toll calls, and local callers were generally not welcome! These "elite" boards had very few callers, small hard drives, ratios of about 1:3 (1Mb upload for every 3Mb downloaded) and the sysops were generally total pricks!

One step down from the elite boards were the popular BBSes for the average joe, where upload/download ratios were much more forgiving (1:10 or so), and the sysops were much friendlier. If you ended up on the good side of a sysop, you'd get a disabled ratio (ability to download as much as you want without having to upload anything). These guys had much more expandable computers, larger hard drives, and they were happy to have any kind of donations to help keep their boards going. BBSes such as Marantz, Pipe 2, Fraggle Rock and Stone Age fall into this category.

The remaining BBSes were a mixture of PD only, combined Amiga/PC, massively crowded multi-node systems, slow 2400 baud modems or just messaging systems. They were worth a call if you were bored but they weren't much fun.

Undoubtedly the most elite Amiga BBS, Shark Island was run by the sysop Sandman. Proclaiming to be NZs fastest board, Shark Island sysops enforced strict upload/download ratios of 1:3 and almost all locals were reguarly purged. Unless you were prepared to blue-box to obtain the latest games, you didn't stand a chance of ever being able to download from Shark Island. 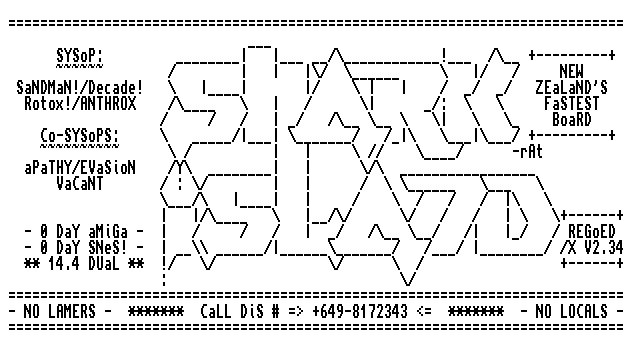 The board was pretty small (about 100Mb from memory) and because of that, older files ended up being spread to other Amiga boards pretty quickly to free up disk space.

The sysop originally using the handle Swatch when he was in the group Reality, then changed his name to Sandman but ended up being kicked out of the group for being dead weight, along with his mate Krazie. As revenge for being booted out of the group, he told anyone who would listen that Reality ripped code from others (which was false).

He then started up Shark Island BBS, and had the first console area in NZ. This seemed a very strange thing to do at the time, as the Sega and Nintendo consoles were not particularly popular in NZ and you needed to purchase a backup system from overseas to load the games from floppy disks instead of cartridge. No doubt this move was done to show how elite the board was, and to encourage overseas callers.

Sandman gained fame in NZ when he was busted for phreaking in 1993 because he way overdid it! At the time, it was NZs biggest case of telecom fraud.

Sandman was definitely in the BBS game for fame and money. One of my contacts (who ran his own BBS) drove a long way to pay $40 for access to Shark Island. He only had a few months of downloading before having his account deleted by Sandman.

The other elite Amiga BBS in Auckland, S.A.R. was run by Shock-G and had the aforementioned Sandman as one of the co-sysops. Most files passed through Shark Island and straight onto S.A.R., which had very similar operating procedures to Shark Island. 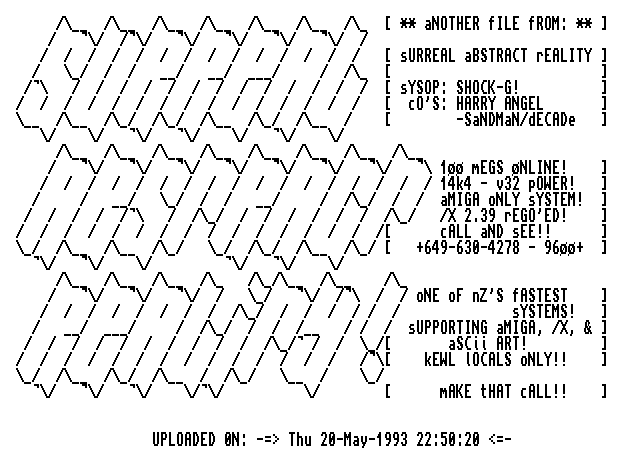 The disk space was very small at only 100Mb, upload/download ratios were very harsh at 1:3, and locals that were not prepared to upload the latest stuff ended up being nuked. The famous ASCII artist Metalbasher created one of their logos: 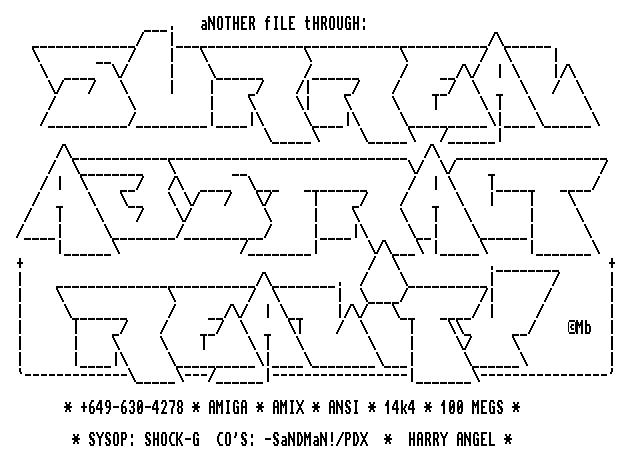 Later on, a much smaller file full of nonsense was tagged onto releases:

Kiwiland was an elite board run by Simon Barton aka Bad Barty/Reality. It was the Reality HQ and was located in the Auckland suburb Silverdale, which I recall being a toll call for most Aucklanders back in the 1990s. That probably explains why I never called it. 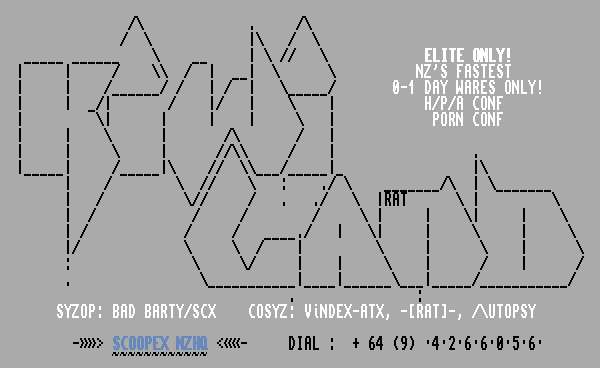 Bad Barty switched from the darkside and opened up a shop called Microworld selling Amiga stuff in Symonds St. When the Amiga stuff didn't pay the bills, he started selling SNES consoles and games, and then moved the store almost directly across the road and renamed it Gamezone. He currently runs the online store Mighty Ape, selling games, computers, books, toys and lots of other stuff.

This BBS was located in Takanini and run by a young guy called Kelly, known as The Rookie. The name of the board came from the brand of his stereo, and was run on a tricked out Amiga 3000 when I first called in 1992. (I believe it was originally running of an Amiga 500). It had 460Mb online, which was enormous for the time. You have to remember that back in those days, an Amiga with a hard drive came with either 20, 50 or 100Mb of space, assuming you were lucky enough to have a hard drive! 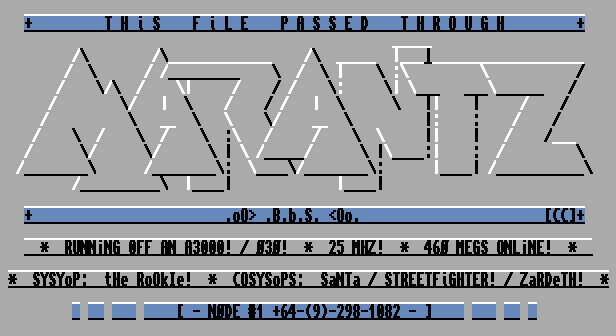 Marantz only ever had a single phone line, which makes the "Node 1" phone number rather amusing! The Rookie once told me that almost nobody donated money to help pay for the phone line, so when I donated something, I ended up with a disabled ratio account for the lifetime of the board.

Due to the large disk space, Marantz had a much larger collection of older games, and the latest stuff was generally only a day or two behind the elite boards. The board was run using the Xenolink software.

Another BBS located in Takanini, Pipe II was run by Koolz, an older guy whose son was a co-sysop and friends with The Rookie/Marantz. It was also run on an A3000 running Xenolink, had a large amount of hard drive space, and the sysop was very friendly and often available for a chat. I also ended up with a disabled ratio account for donating a little money when I first got my 14.4 modem.

Pipe II didn't really tag their files, so I don't have any old ASCII logos from back then.

Run by Streetfighter, Fraggle Rock was one of the best BBSes in Auckland at the time. It had the latest games within a day or so of being released, and had quite a few phreakers (Nightcap, Odyssey etc) also supplying software after blue-boxing. The sysop was a friendly chap that I met regularly at the Tamaki campus of Auckland University. 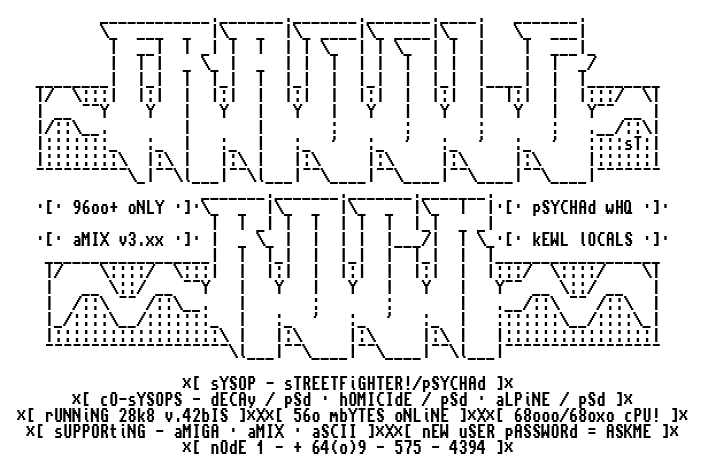 Near the end of Fraggle Rock's life, Streetfighter introduced a new co-sysop called Homicide, which was actually himself. I can only guess that this was done to retire the Streetfighter name slowly while his BBS changed names.

The stated HD capacity of the BBS also fluctuated wildly over time. I'm pretty sure he never had 560Mb online, he definitely never had 3 nodes, and in one ad quite late in the piece he even claimed to have 2.3Gb online!

Space Age appeared as a makeover to the BBS Fraggle Rock, and the sysop was Homicide/Psychad Design. Psychad Design was the group he started and I was a member. He promised that if I made an ASCII art collection, he would spread it to the overseas BBSes and indeed he did. It's still very amusing to see the old ASCII art collection on the internet today. Art-Mania was one of his labels for all the ASCII art: 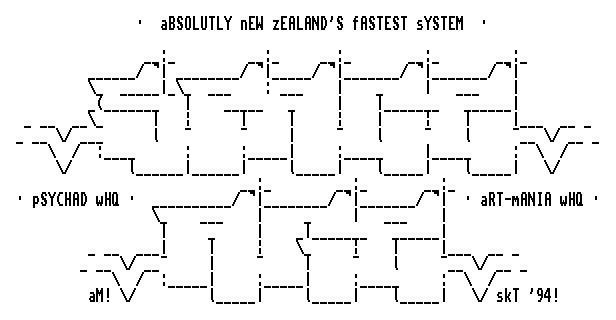 The Whangarei coder Robster (who changed his handle to Frantic) also knocked up a few intros for Psychad Design which were distributed with several archives of original material.

Surely the most apt name for a BBS, Stoned Immaculate was run by a sysop calling himself Overdose, who was a total nutter!

I believe the BBS only started up in late 1993 or early 1994, and he was the biggest Amiga board ever. He took great delight in breaking into chat mode, entering the command line, and typing a "dir" command to show that he had 1 gig of diskspace. (If memory serves me right, he paid just over $2000 for that privilege. To put that in perspective, an 8 gig flashdrive now is currently about $5!)

Sadly I don't have any ASCII ads or logos from Stoned Immaculate.

I don't really remember much about this BBS at all but found a few files with their ASCII logo inside. It mentions Wraith as one of the co-sysops, who was one of Sandman's mates and a co-sysop on Shark Island at one point. Wraith liked to talk himself up as some really elite importer, but was just blue boxing like many others. Crystal Caverns is yet another BBS claiming to be NZ's fastest system: 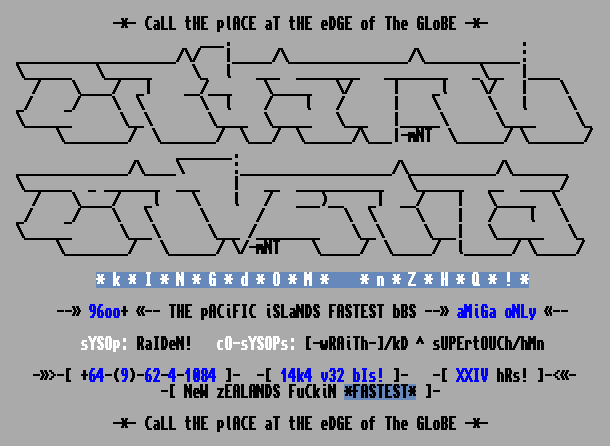 Supertouch is also mentioned as one of the co-sysops, who was also a co-sysop on Pirate's Den.

Crystal Caverns claimed to be the Kingdom NZ headquarters. As far as I know, Kingdom only released a single crack on the Amiga, Naughty Ones from Interactivision: 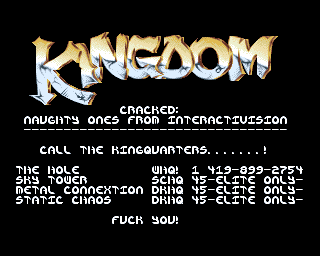 Pirate's Den was yet another BBS claiming to be NZ's fastest, but it was very late on the scene. It was still running in February 1995. My memory is a little hazy here, but I believe Supertouch started his own group called 'Hardline' and wrote quite a few utilities in the Amiga programming language 'E':

A very large Auckland BBS which had 4 nodes by the time I bought a modem. Node 1 was 2400 baud only, and anybody could call. The remaining 3 nodes were 14.4k or better, but were donation only. The Village was mainly a PC board, but had a smaller Amiga section aswell. I suspect most callers were PC guys, and they must have made quite a lot of money as all 4 lines were always busy.

Due to the lousy Amiga section and huge number of callers constantly trying to connect, I never bothered too much with the Village, and so was stuck on the 2400 baud line with a small time limit and lousy ratio. Amiga games were never uploaded very quickly, so you were better off ringing a dedicated Amiga BBS.

I don't recall any text files advertising themselves either, hence the lack of an image for the Village. The sysop was called The Mayor (very predictable) but they did have quite a collection of "door" based games where the top players received extra time or download credits.

I have lost touch with everybody I used to know on the BBS scene during this crazy period of the Amiga, so if anybody personally mentioned in this rant wishes to contact me, I would be happy to hear your thoughts - even if you disagree with what I've written and wish to flame me. Go ahead! :)