Quite simply, The A-Z of Commodore Amiga Games by Kieren Hawken is the worst Amiga book I have ever read. It's a rambling collection of game "reviews" by an extremely biased and Atari ST obsessed trouble-maker, and the majority of the reviews seem to have been copied and pasted from his other "books". The "reviews" are full of spelling mistakes, poor grammar, incorrect facts, and downright lies. No proof-reading seems to have taken place. The writing is at a level comparable to a child, still learning basic writing at primary school. I suspect the author has never even played these games on the Amiga, and simply stole screenshots from YouTube for his Amiga "reviews".

I'll briefly go through some of the worst reviews I noticed in this book to explain why it's a waste of your time and money.

The first review in the book, and Kieren made a pretty bold claim that Roger Dean and Psygnosis stole the box-artwork:

Another really interesting thing I found out is that the box art was actually stolen from an early ZX Spectrum game by Artic Computing called Planet of Death.

According to Kieren, Psygnosis stole the old ZX Spectrum artwork, re-created the parts that were drawn over, added sections that were missing, re-coloured it, then put their title over the top. The truth is Psygnosis licensed the original artwork themselves, and were then free to add their own logo. 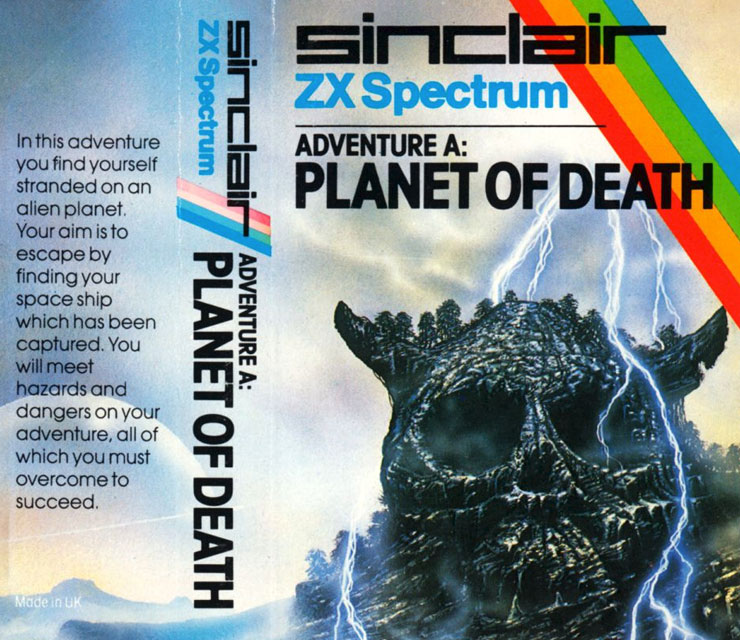 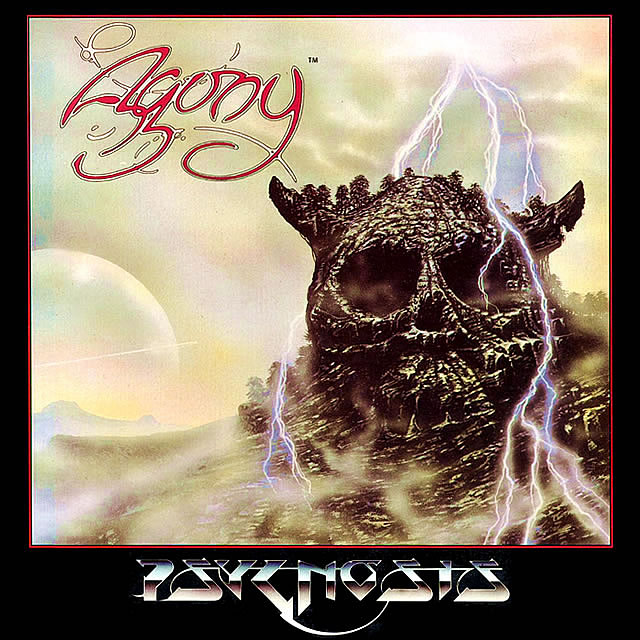 Kieren then questioned if the owl's name is Psygnosis.

You must guide the owl (is his name actually Psygnosis?)

A few seconds research would have shown Kieren that it definitely isn't. From graphic artist Franck Sauer's wonderful Agony entry on his website:

We used an Owl as the main character because we thought it would be very cool. This was our choice, not Psygnosis. The owl as a main character was not imposed to us by Psygnosis. We were looking for a flying animal to mach with the graphical design of the game, and when we signed with Psygnosis, we liked that company so much we thought the elegant beauty of an owl seemed a good fit. I used a sequence at the beginning of the film 'Labyrinth' as a reference for creating the animation. 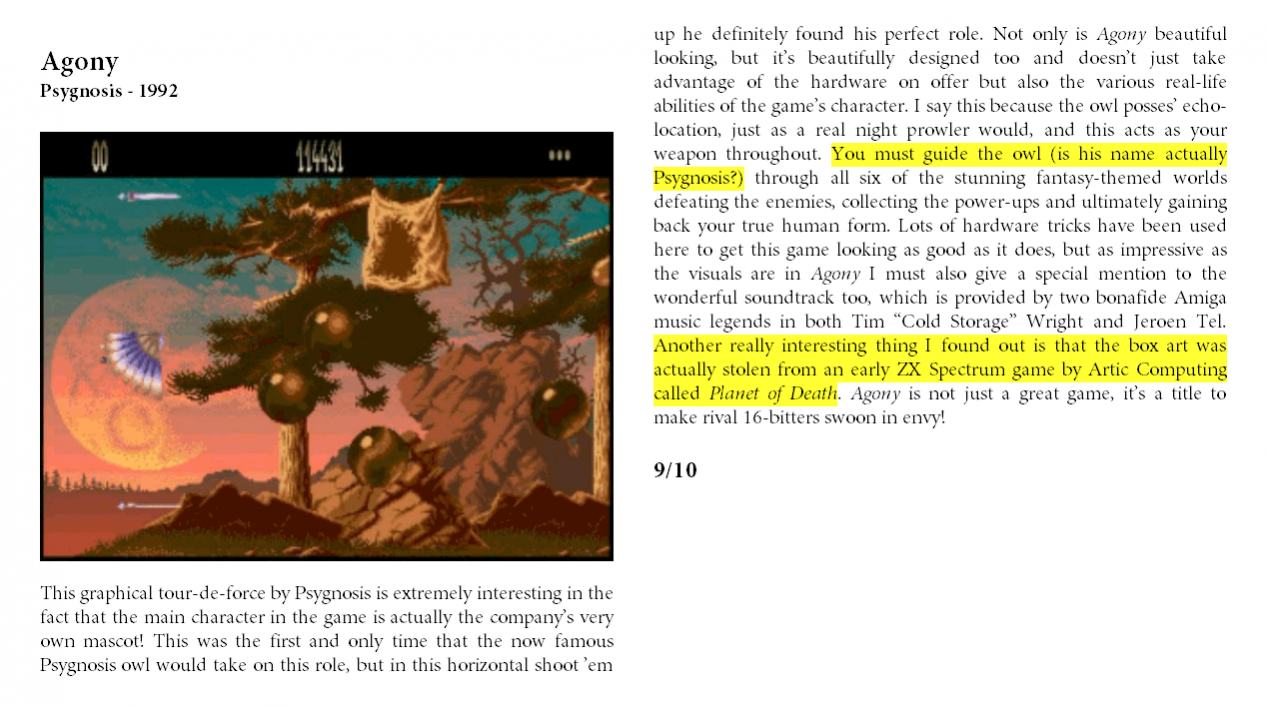 The ridiculous A-Z template Kieren sticks to in his books where he picks 3 games from each letter of the alphabet means he constantly has to shoe-horn games into unpopular letters to pad out the book, Rather than putting Another World under the letter 'A', he included it in the 'O' section for the USA-only title Out of This World — but never bothered to explain this. He confused himself through the review, switching between the names. The grammar was absolutely terrible in this review, such as this sentence: 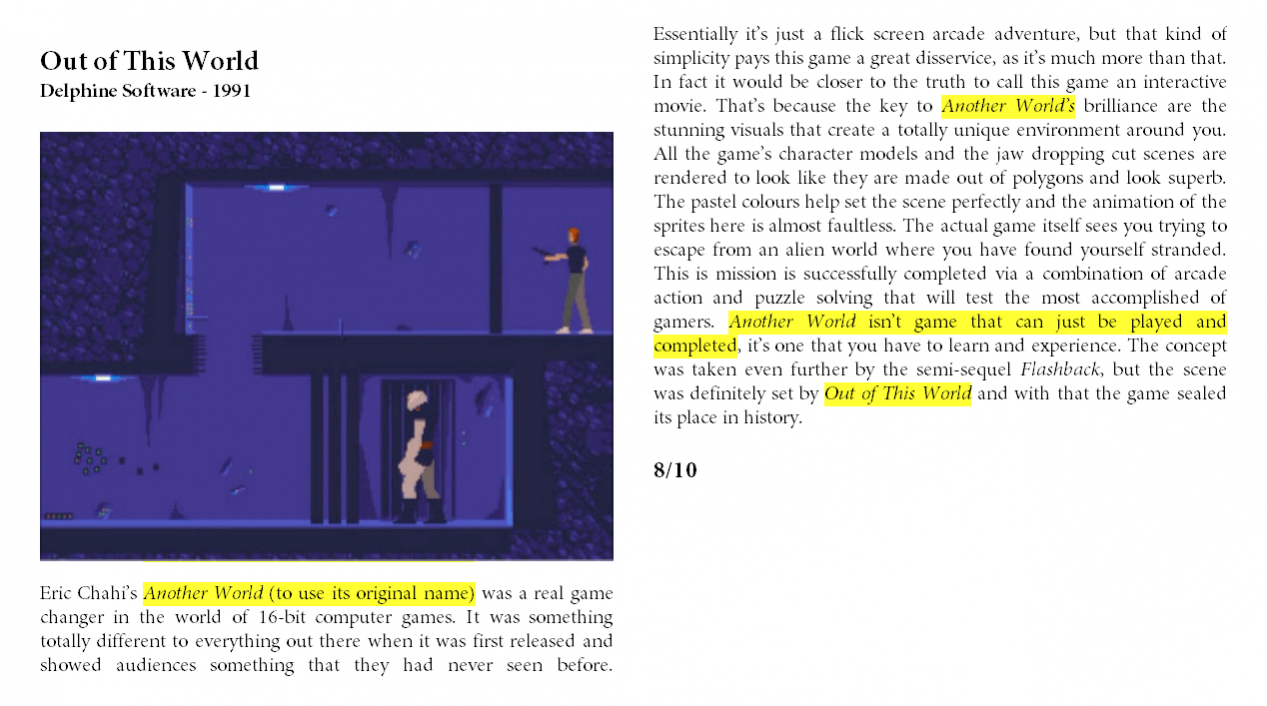 Another casualty of Kieren's stupid maximum-three-games-per-letter idea, Barbarian had to be shifted to the letter 'U'. The status panel even shows 'Barbarian' at the top, not "Ultimate Warrior (The)". There is also no mention of the USA release called Death Sword, something any games journalist should have known. 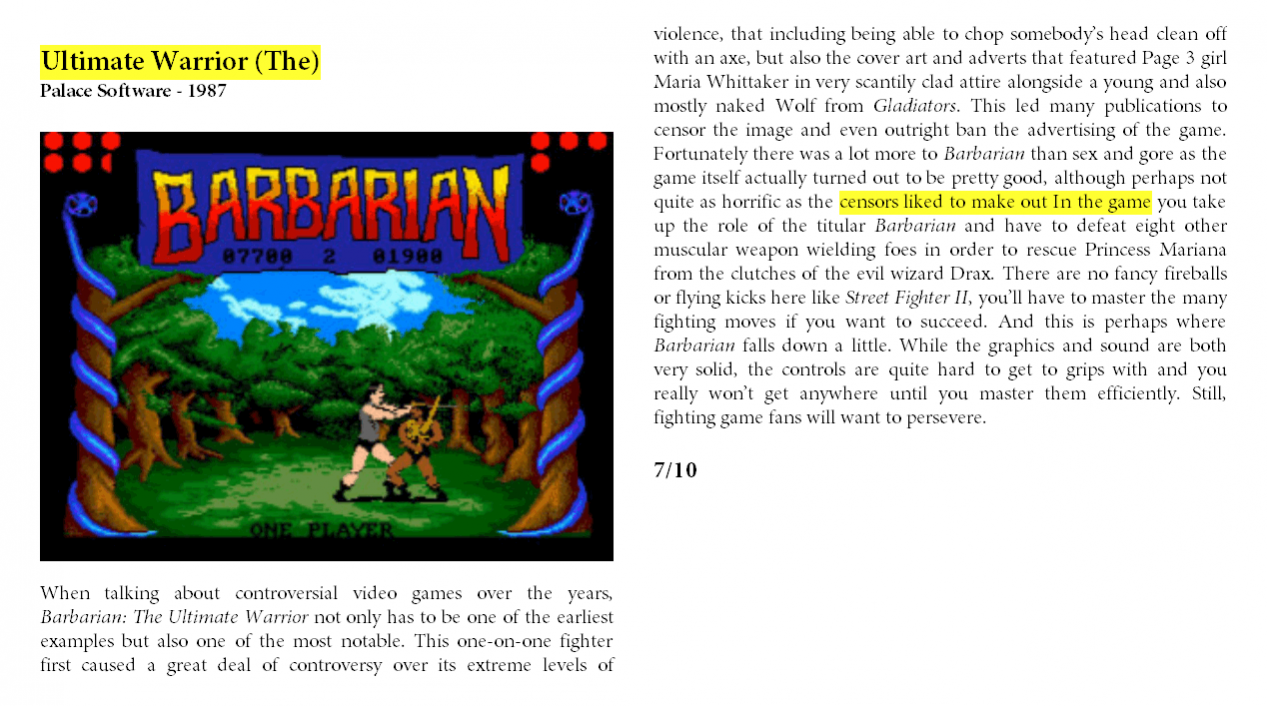 In 1993 the much loved Team 17 went about to try and fix that with the release of Body Blows, a pretty blatant clone of Capcom’s Street Fighter II.

Kieren's lack of Amiga knowledge showed when he summed up the game with this awful sentence:

At the end of the day this probably as best an example of the genre as there is for the original version of the Amiga, it’s certainly playable but also fairly flawed.

I'd wager that he's never played Shadow Fighter, Fightin' Spirit, Mortal Kombat or Mortal Kombat 2 on the Amiga — titles that are all much better versus fighting games than Body Blows. 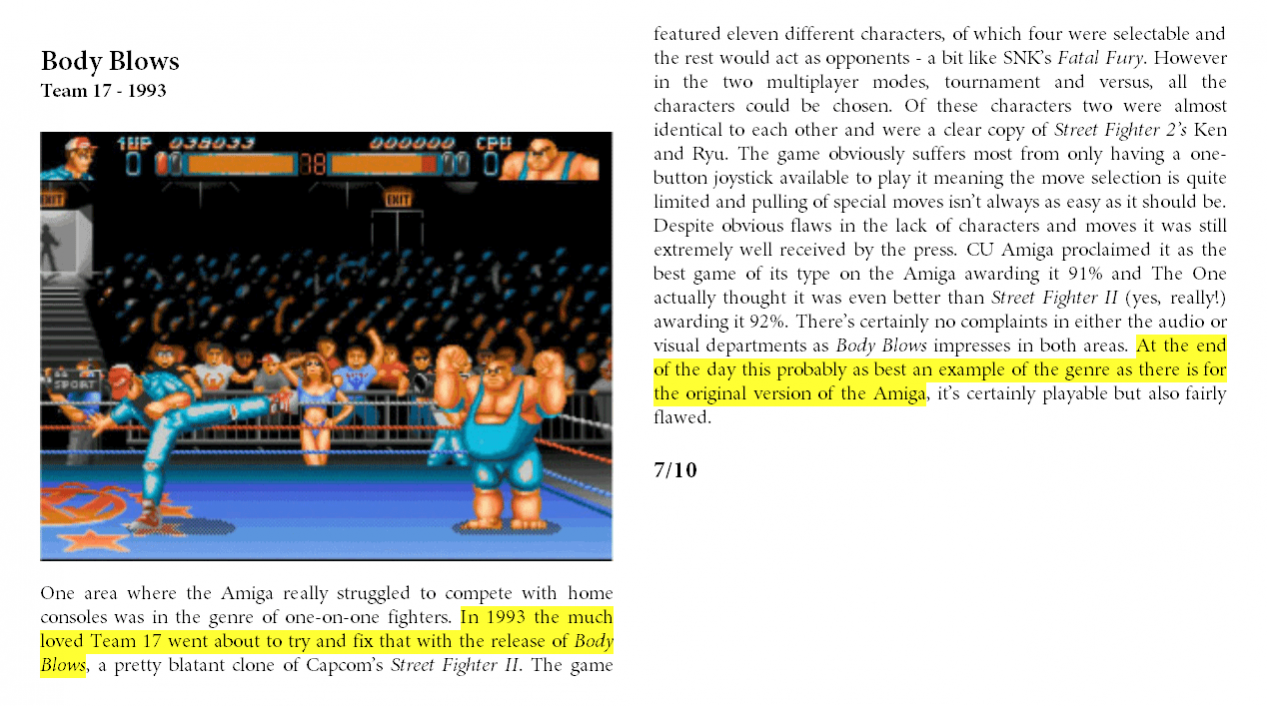 Bubble Bobble is yet another copy and paste review from many of Kieren's other books, complete with all the same mistakes. The game was released in 1988, not 1987 as Kieren wrote at the top. The main characters Bub and Bob were turned into dragons, yet Kieren wrote:

Playing the parts of Bub and Bob, two humans who have been magically turned into dinosaurs

Kieren's been pulled up multiple times that Bubble Bobble features bonus letters in the bubbles that spell out "EXTEND", not "EXTRA". In the Amiga version, collecting these six letters awards a bonus life and completes the current level, yet Kieren's reviews all seem to include this load of nonsense:

You must also look out for the bonus bubbles that contain letters spelling the word “EXTRA”. If you get all these letters you then activate a warp taking you several levels ahead.

The screenshot included in the book even shows EXT--- down the left, and E-TEND on the right, so maybe he needs to get his eyes checked out!

Many others have suggested that Kieren doesn't even play the games he reviews, and simply steals screenshots from YouTube videos. I managed to confirm this, and matched his screenshot to a longplay video by bethelarmerfisch at 44:58.

LynxGod has already ripped apart Kieren's Commodore 64 review of Bubble Bobble and most of it applies to this Amiga "review". 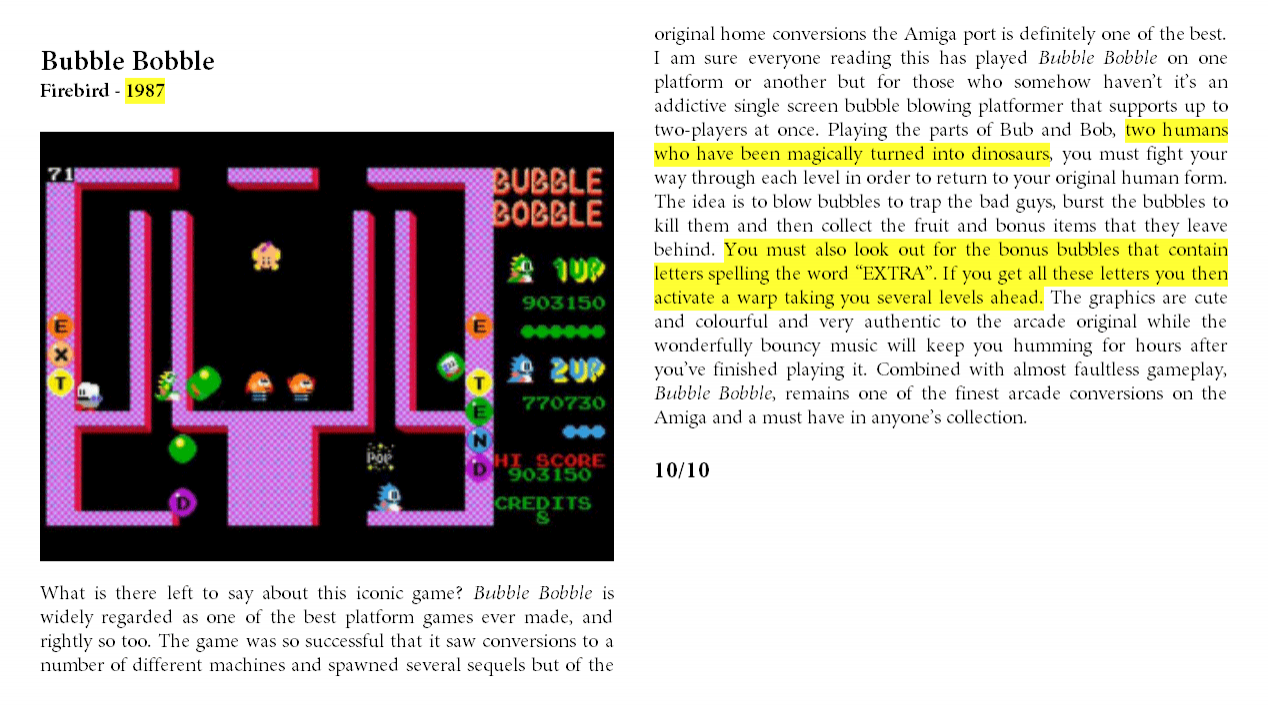 The Empire Strikes Back

The Empire Strikes Back review seems to be a copy and paste review from his earlier books, complete with horrendous blunders like this:

Released in 1985, The Empire Strikes Back is not just the third film in the original Star Wars trilogy it is also the third game in the Atari arcade trilogy.

According to Kieren, Star Wars was released first, followed by Return of the Jedi, and the trilogy reached its conclusion with The Empire Strikes Back! Youtuber Lynx God has done a full tear-down of Kieren's Empire Strikes Back review, and most of the mistakes apply to this Amiga "review". 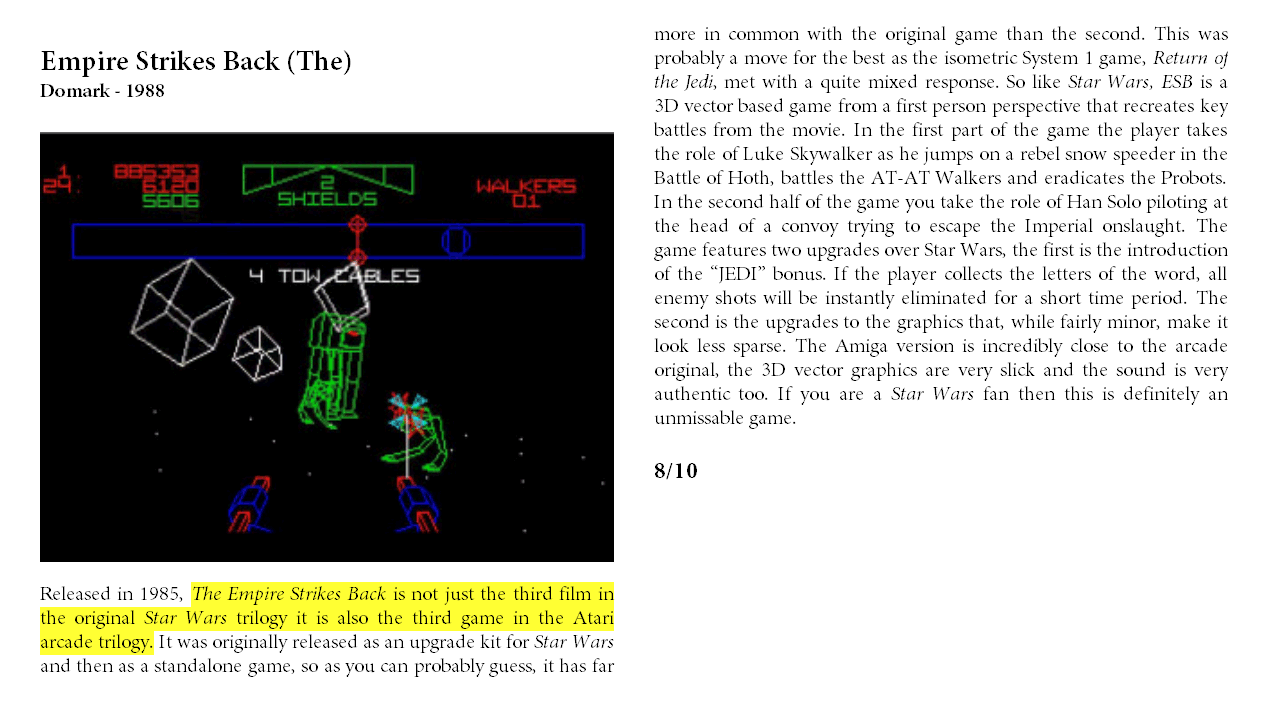 In the James Pond review, Kieren spelt the name of the publisher (Millennium) incorrectly. His hate for platform games shined through as he awarded the game a measly 4 out of 10, despite admitting the game was extremely popular with gamers:

This game was incredibly popular back in the day but I’ve always found it really tedious to play. It always felt like a budget title to me with its generic gameplay and lack of excitement. The graphics and sound are both average at best and nothing to get excited over. James Pond really is a game that belongs at the very bottom of the sea!

In fact, the game was popular enough that it spawned a number of sequels, the game received average magazine ratings of 83% at the time, and 113 Lemon Amiga users average rating is 7.27 out of 10. 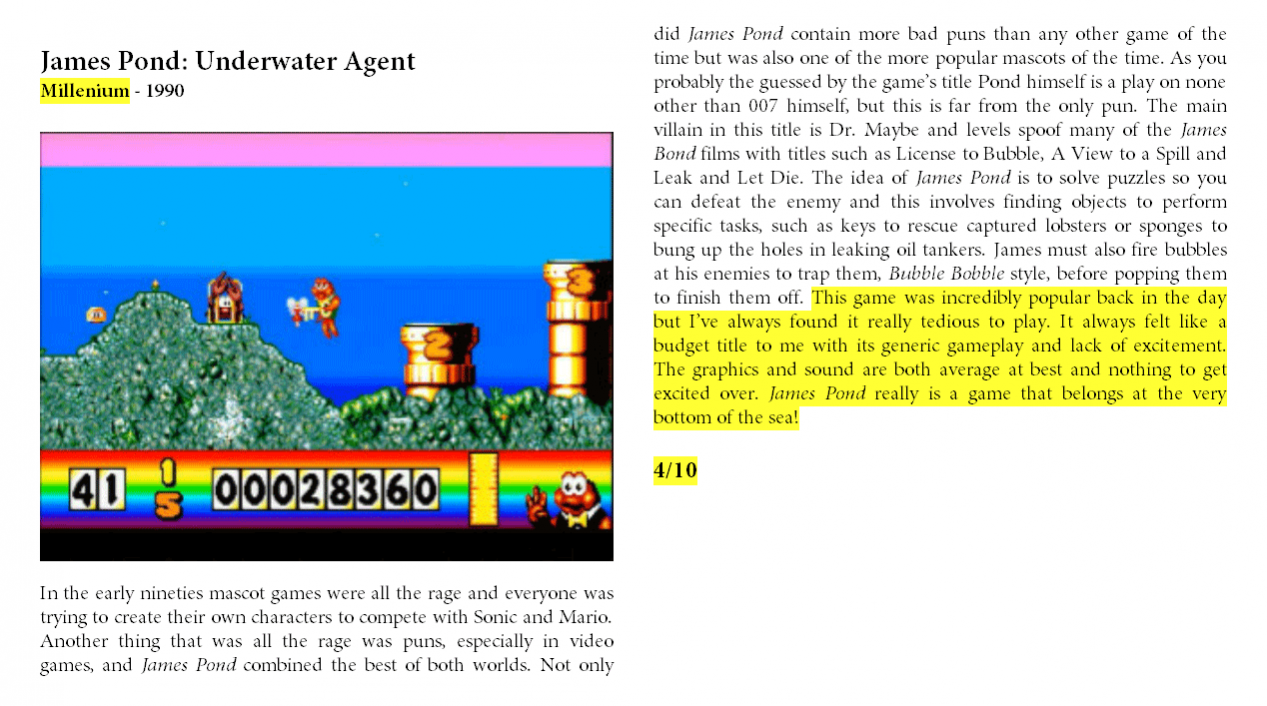 It's painfully obvious that this review was copied from his Atari ST book. Whenever Kieren compares soccer games, he brings up Sensible Soccer — possibly the best football game on the Atari ST — but not the best on the Amiga.

Because Sensible World of Soccer (SWOS) was never released on the Atari ST and Kieren is unfamiliar with it, he always includes Atari ST games for comparison. Amiga owners will always compare soccer games to SWOS and Kick Off 2, never Sensible Soccer. You are usually in the SWOS camp, or the Kick Off 2 camp. 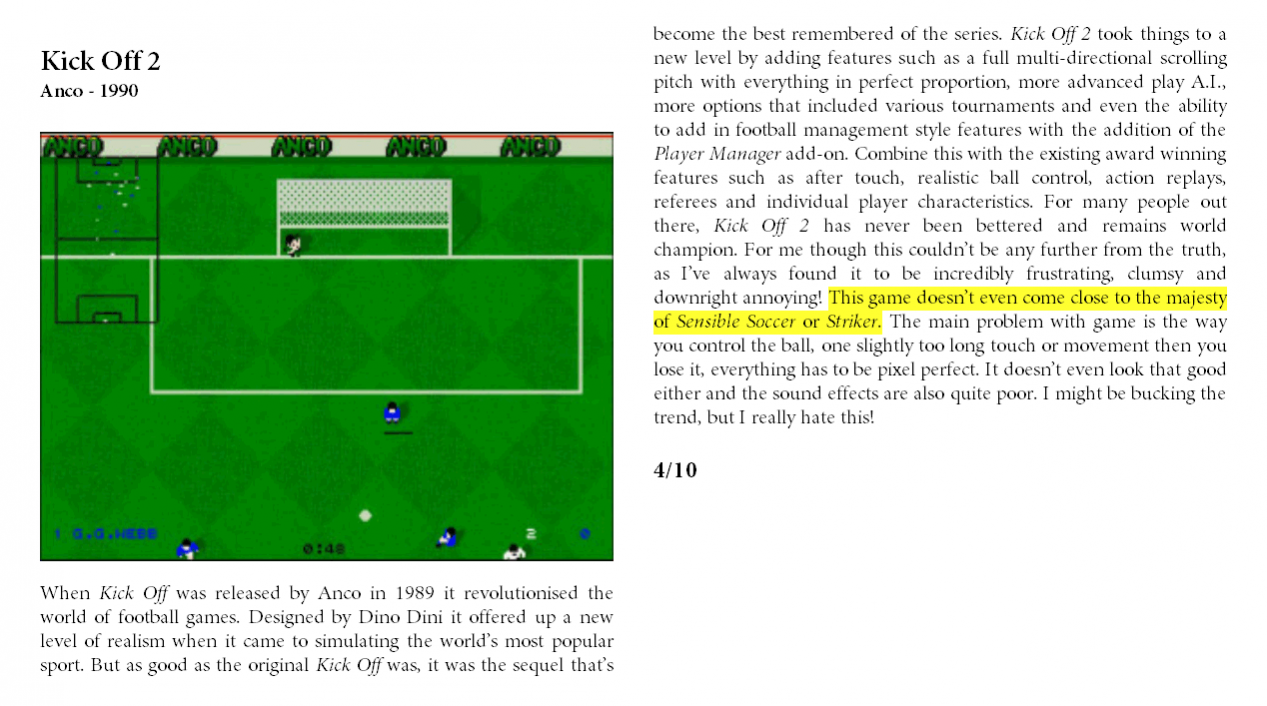 Definitely one of the worst review in the book, Kieren gets so much wrong in this review it's hard to know where to begin. Kieren is in desperate need of a proof-reader, when he writes sentences like this: 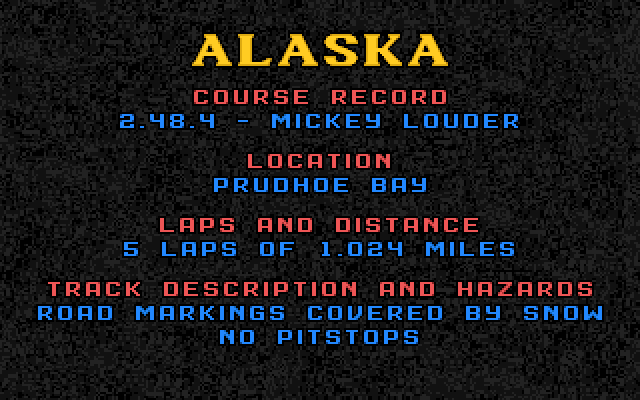 The Alaska course is located in Prudhoe Bay, one of many "famous circuits" according to Kieren. In reality, Prudhoe Bay is a small place in Alaska with a permanent population of approximately 2000 people and no racing track. Kieren didn't seem to realise that the circuits in the game are fictional.

Kieren has a bad habit of writing "also" and "too" in the same sentence in his reviews. He also regularly mixes up "it's" and "its". Both errors are contained in the Lotus review.

Kieren also claimed that Ben Daglish wrote the Amiga soundtrack. This is wrong, as Ben Daglish (RIP) himself confirmed before his passing, in addition to the programmer Shaun Southern, who has been incorrectly credited as the Amiga musician on many internet websites. 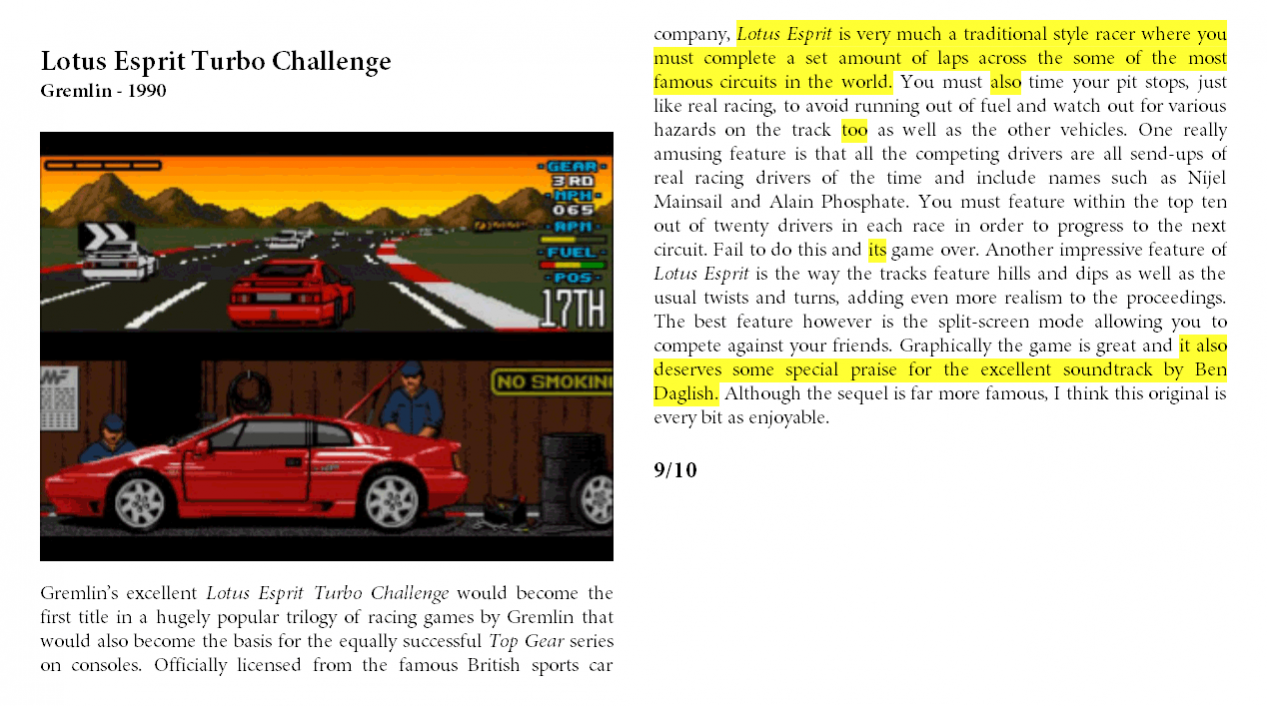 Publisher Team 17 went from releasing titles such as Alien Breed in 1991, to being "much loved" in 1993 with the release of Body Blows, to being "unheard of" when they released Worms (also in "1993" according to Kieren):

Before the release of Worms hardly anyone had even heard of Team 17.

Worms was actually released in 1995, not 1993 as Kieren incorrectly stated in this book. Team 17 remained extremely popular on the Amiga throughout their lifetime, and there would be very few Amiga owners that had never heard of them. The majority of their games required 1Mb of RAM, which helped convince many stubborn Amiga owners to upgrade their memory from the base 512k machine. 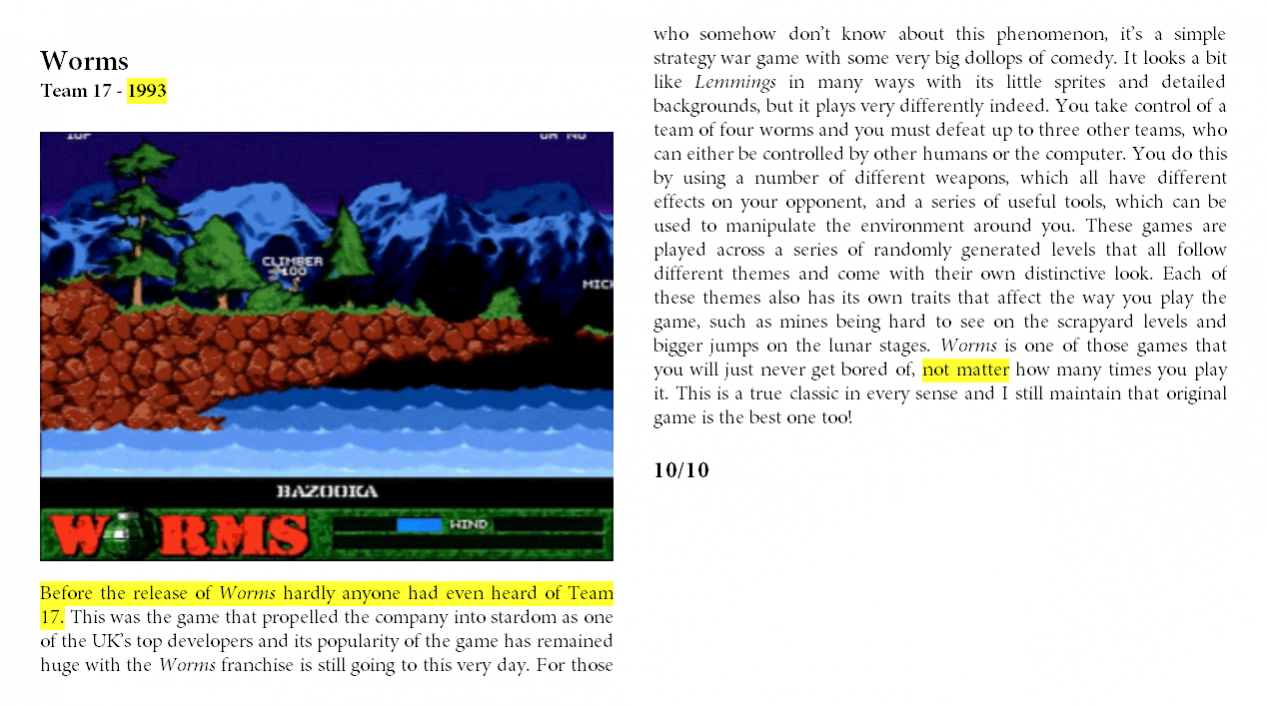 This book is a complete disaster. Kieren Hawken has no love for the Amiga, and it really shows. There's hardly any Amiga-specific games featured, and he name-drops Atari over and over in the reviews. Everything seems to be a rip-off of some "amazing" Atari game, or was done earlier and better by Atari. The book's been churned out by copying and pasting reviews from his other books, and is nothing but a quick cash-grab. If you really want to see how bad this book is, check out the free samples on the internet, or download a PDF of it. Don't waste your money buying this utter trash.

I'm aware that Kieren Hawken issues takedown notices to Amazon, YouTube and Facebook for negative reviews of his books. If you've ever had any of your comments removed in the past, feel free to post your honest comments below. If you'd like more detailed information about these reviews, I recommend the following videos where the creators have delved much deeper into the Kizza review cesspit.