Amiga » Rips » Beyond the Ice Palace

Beyond the Ice Palace 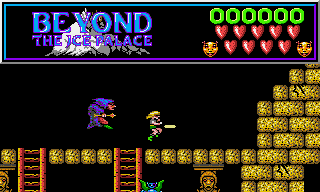 When Elite Systems acquired the licence to the ThunderCats in 1988, they intended to release the game just prior to Christmas to cash in on holiday period sales. Paradise Software were contracted to write the ThunderCats game for Elite, and they set about their work. In the meantime, Elite decided that if the Paradise Software version was not completed in time, they would be in trouble so began writing their own backup game in-house.

Near the end of the year, Elite worked out that neither game would be ready in time, so quickly looked around other software houses for anyone with a game that could be converted into a ThunderCats game. They found Gargoyle Games' subsidery "Faster than Light" were putting the finishing touches on "Samurai Dawn", a horizontal hack and slash game. Elite bought the rights, renamed it to "ThunderCats: The Lost Eye of Thundera", and released the game.

The Paradise Software version was eventually finished, and released in 1989 as "Beyond the Ice Palace", dropping the original ThunderCats prefix from the name. The 16-bit versions contain various ThunderCats character names in the maps, ending in a battle with Mumm-Ra in his pyramid. The tile blocks contained the names of the enemies to help the map maker lay out the game.

Here are all the graphics from the game, including the maps. Level 1 is split into 2 parts, which is how the game stores the map. When you reach the bottom corner of the map, it switches to the second part of the level.

There's a great video on YouTube discussing the 3 ThunderCats video games that Elite Systems intended to release back in 1988. Enjoy!