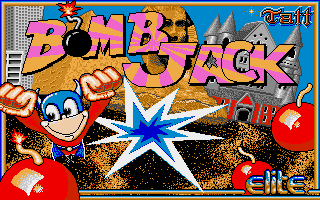 The Amiga received an awful conversion of Bomb Jack, courtesy of Croatian based Paradox Software and published by Elite. Paradox were the in-house development team of UK-based Eidersoft, not to be confused with the famous Amiga cracking group.

Paradox converted many games from the Atari ST, and just about all of them are straight Atari ST ports. Bomb Jack was no exception, with an ugly 16 colour palette, moving objects stored in the native Atari ST screen format and awful sound too! How Elite thought this pile of excrement was worth £25 at the time of release is anyone's guess!

Here are the entire set of graphics extracted from the game for your pleasure (or horror). The most sad thing about this is that the Amiga was capable of a 100% perfect conversion of the arcade game, yet we ended up with this mess.