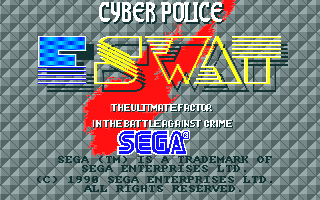 Creative Materials/US Gold had a habit of converting dull coin-ops to the home computers, and Sega's ESWAT is no different. A washed-out and ugly 16-colour game (presumably so it could be ported to the Amiga and ST easily) and looked like a real rush-job. The development team couldn't even spell 'Europe' correctly!

The game features a terrible frame rate, boring gameplay, and I really cannot understand who the target market for a game like this would be. The coin-op is a very run-of-the-mill shoot'em-up employing the age old "duck to avoid the enemy gunfire" mechanic, so I cannot fathom who would love it so much that they would hand over Â£25 to play a US Gold interpretation of it.

The Amiga version stores the majority of the graphics in compressed IFF files, so they are at least easy to rip, and there's even a (typically dull) hidden message from the programmer on the disk. I was hoping there would be a Richard Aplin style rant from programmer Timothy Cannell, but sadly not in this case.