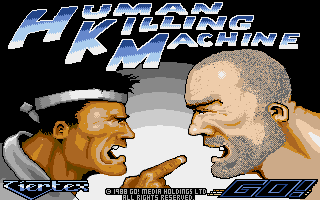 After releasing the terminally dire conversion of Street Fighter, the Tiertex mob decided the easiest way to extort money from Amiga owners was to create another beat'em-up based on the Street Fighter engine.

Tiertex removed the 2 player mode and reduced the gameplay area to a single non-scrollable screen. Without any kind of scrolling, there was no need for parallax, so that went out the door aswell. By freeing up that extra memory you would assume they would add extra features, extra moves, more animation frames. But you can probably guess, none of that happened.

Just like Street Fighter, the graphics for each fighter had to fit on a single 320x200 screen, meaning there are very few frames of animation. The ultimate insult is the final enemy, who has only 6 frames of animation - 2 of which are his death sequence!

Tiertex were not even capable of mastering the game correctly, and the last fighter has corrupt graphics because the final track of data was not saved onto the disk. Musashi/Flashtro along with a little help from yours truly actually managed to fix the missing graphics by importing the Degas Elite file from the Atari ST release. This is probably the only good thing to come out of sharing the same (awful) graphics from the ST version!

Here are the entire set of (fixed) graphics extracted from the disk image. The entire game uses the same ugly 16 colour palette except for the loading screen and high score table. Note the incredibly poor dithering on the backgrounds, especially the Germany level.