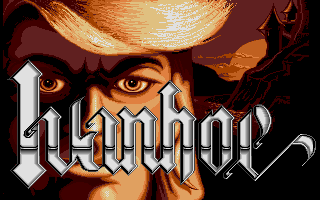 Nice graphics, shame about the game! Ivanhoe had massive hype surrounding it's visuals when it was released due to some of the cartoonists that worked on the Asterix movies working on the game. The game itself is 16 colours and visually beautiful (like all Ocean France games), but the animation is sub-par with very few frames of animation. And the gameplay is severely lacking in my opinion.

The scrolling levels (1, 2 and 4) are stored as massive images in memory.

The 3rd level (on horseback) is constructed from 3 layers; a static layer at the top (320x64), then 2 layers (320x40 but stored next to each other so 640x40) scrolling at different speeds. The horse only overlaps the bottom 2 layers, so the game only has to update a 320x80 pixel area by drawing the 2 layers then the front objects.

Here are some of the graphics from the game!