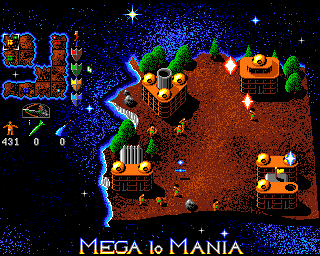 Many of Sensible Software's games stored all their graphics in compressed IFF files on the disk, making ripping them a relatively painless process. They often contained hidden messages, and Mega lo Mania is no exception. Check out the black text in the credits screens. In the original game, the green is drawn as black so the text never shows up, but you can see them below.

Sensible Software deserved a lot of success with the game, but when Robert Maxwell drowned in November 1991, Mirrorsoft went belly up, and Sensible's chance of a large payday sunk.Â You can at least enjoy full rips of Jon Hare, Jo Walker and Alan Tomkin's combined work.

A sequel to Mega lo Mania was begun work, but development was halted after about 3 months and the programmer assigned to another game. The game was never completed, which was a shame as the original was superb.