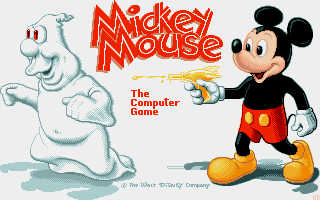 Some nice graphics, shame about the game! Mickey Mouse was one of Gremlin's turkeys from 1989, a slow and boring game where you walk around the platforms, up the occasional ladder, and shoot your water pistol at the nasties. There's a few sub-games thrown in but they're all very dull, and it's an Atari ST port.

C+VG magazine hyped Mickey Mouse in their July 1988 issue due in no small part to the prize Gremlin offered for a competition that ran in their rag, but the C+VG mob must have realised the game was a bit of a dud as they never actually bothered to review the game!

Strangely enough, the other magazines at the time gave the Amiga version favourable reviews! I'm not sure what they were smoking at the time, but it must have been some strong shit.

The most interesting thing about the game is surely the Amiga loading system, where each track is made up of 3 "sectors", each with a different sync ($a245, $8a91 and $a291), each sector storing 2000 bytes to give a total of 6000 bytes per track. It took numerous readings of the disk to extract the data, as each warp file I was sent seemed to contain different errors. Thanks to my patient original suppliers, I eventually managed to extract all the correct data and made the hard drive version.

The cracking group Quartex butchered their version by altering lots of the in-game text, changing "witch" to "bitch" or "mitch" etc. Very lame and quite unlike them.

The game stores all data in Atari ST Degas Elite format (PI1), and there's one extra tileset which is used to create 6 extra screens used for the sub-games. The map masks off the top bit of each byte to indicate the collision status of the tiles.

For those that are curious, the strange numbering of the graphics comes from the WHDLoad version. The number (in hexadecimal) in each filename is the starting track, so it knows which file to load.

Here are all of the graphics from the game converted back to PNG images.