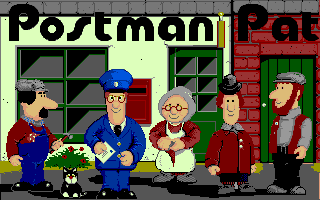 The title screen on this game always looked unfinished to me, as if the designer cut out the font for the shadow and forgot to put the text back over it.

This game was far too difficult for the target market that would have wanted to play this game. Awful collision detection and an uncontrollable van meant you'd see the "Oops, you have crashed! Get another van" message constantly. Young kids would surely be throwing tantrums if they were to sit down and play this game for any length of time.

There's not too much in the way of graphics in the game, so here are the entire set extracted from the game, along with the main map. The various locations were also stored as small maps by the game.