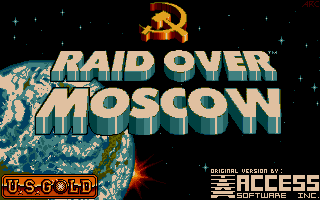 Rob Brooks and Adrian Cummings intended to convert a number of Access Software's best C64 games to the Amiga for US Gold. All 3 games were released in the mid 1980s on the C64, and it seemed quite strange that Amiga versions would be released so much later.

Unfortunately the deal with US Gold fell through, and the only thing that remained were these rather nice graphics.

In a strange twist in late 2016, English Amiga Board member Erik Hogan (earok) began writing a version of Raid Over Moscow in Blitz Basic, and after just one weekend had 3 sections of the game working! Hopefully he will not lose motivation and the entire game may be released one day!