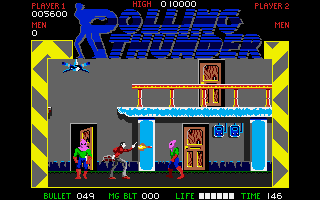 The first 16-bit game off the Tiertex production line in 1987 was a conversion of Namco's Rolling Thunder. The Amiga definitely had the hardware to produce a very accurate conversion, but with the Tiertex boys at the helm, disaster loomed.

The display is very small at only 258x198 pixels, and it takes up less than 80% of an NTSC screen (or 62% of a PAL screen). To add insult to injury, the actual game window is a pathetic 224x128 pixels in size, which is less than 45% of an NTSC screen! The status panel takes up another 35%, and there's 20% black pixels. (Huge status panels would go on to feature predominantly in Tiertex games).

With this miniature game window, you would hope the game ran at arcade speed, but you couldn't be further from the truth! Despite the game only having to display 16 colours, with no sprites and no copperlist to eat up the DMA time, the game updates the display every 7 frames. I kid you not. That works out to be about 8 frames per second! I really cannot understand how you could possibly make the game that slow, as even with really inefficient code you could re-blit all the tiles in that small game window easily in 2 frames. What the game is doing for the other 6 frames I have no idea.

Like the majority of Tiertex titles, the credits are difficult to find. Donald Campbell left his name in the executable file, but it's never displayed by the game. Then again, if I'd written this version of Rolling Thunder, I wouldn't want my name displayed either.

There's not much in the way of graphics to see in the game. All the objects fit on a single oversized sprite sheet, and the game mirrors the graphics so it can draw objects facing both directions. One set of tiles creates the entire map, and the most interesting thing is how the screen creates a path through the map. Apart from that, there's nothing to admire from this terrible game!