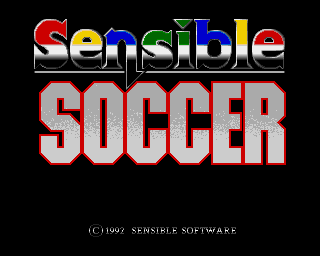 The majority of Sensible Software games store their graphics in compressed IFF ILBM format, and Sensible Soccer is no exception.

The team strips are created by altering the palette of various versions of the player strips, creating solid colour tops, or mixing vertical or horizontal stripes for teams.

The vertically scrolling credits are stored as images three times the height of the screen, and are scrolled up over the top of the background image in dual playfield mode. This uses two independent playfields of 8 colours (with one being transparent) on top of each other.