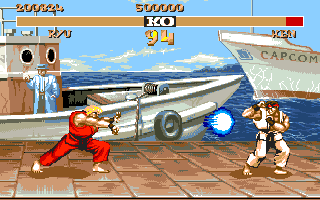 US Gold graced Amiga owners with a pretty dire conversion of Street Fighter 2: The World Warrior. The palette choice was odd, and it was very slow.

The most interesting thing is how the team chose to slice up the graphics for drawing to the screen.