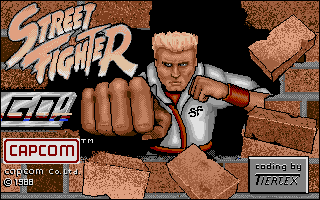 Coding by Tiertex. The 3 words that struck fear into 16-bit owners back in the 1980s. Street Fighter was an absolutely disgraceful conversion, a level that Tiertex managed to maintain throughout their sorry existence.

The Amiga version shares the same awful graphics as the Atari ST version, storing them natively in Degas Elite format. For that reason, the game was reduced down to 16 colours. The exact same 16 colours are used on every level.

The gameplay area used the NTSC screen size of 320x200 pixels, but the frame rate suffered. The game updated the display every 8 frames or approximately 6 frames per second on PAL Amigas.

The special moves from the arcade were all removed, and the number of frames of animation and attacking moves were heavily culled. This was because the graphics for each opponent had to fit on a single 320x200 screen which was horizontally flipped in memory to create the animation frames for both directions. You would think that with a woeful screen refresh of every 8 frames you would be able to mirror the graphics as you drew them and double the number of animation frames. But this is Tiertex we are talking about...

This entry is more for comedy value than anything else, as I can't see any sane person ever wanting to use these graphics. The full graphics from the game are presented here so you can see what a lousy job Tiertex did. I usually like to end with something like "enjoy these", but I know you won't!