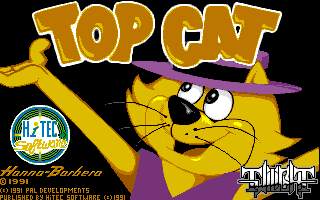 Development team Twilight were prolific at churning out fairly bog-standard "run around a maze collecting things while avoiding random obstacles" platform games, and Top Cat is no exception.

Top Cat was released as a budget game at £7.99 at the time, and was mostly ignored by reviewers, as there were multiple Amiga games released every day during 1991. Stuart Campbell complained in the Amiga Power review that they had to go and buy the game after Hi-Tec refused to send out review copies.

The graphics are fairly good representations of the Hanna Barbera cartoon, but the gameplay is rather lacking and there's no real sense of excitement. It does seem strange that a cat loses energy when colliding with birds, mice and rats, yet dogs cause no damage!

Here are the entire set of graphics extracted from the game, along with the maps for all 3 levels.