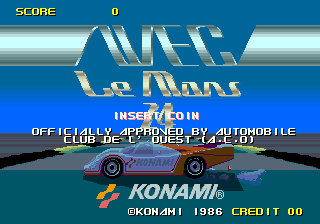 WEC Le Mans was one of the many unreleased games from Ocean France. They had a habit of starting work on games before they gained permission from the coin-op manufacturers, and several of their games were complete but never released.

According to one contact at Ocean UK, they used the Batman racing engine with some mockup graphics to test out what WEC Le Mans might look like, but it's unclear whether they were using these graphics from Ocean France or not.

Thanks to Dlfrsilver for supplying these files!