Amiga » Rips » Yogi Bear and Friends in the Greed Monster

Yogi Bear and Friends in the Greed Monster 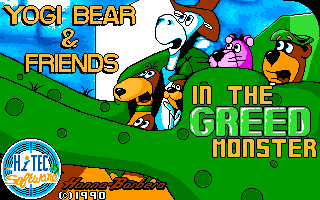 Hi-Tec were prolific at releasing games based on Hanna Barbera cartoons. They seemed to be clued up on broadcasting schedules and would know that a particular cartoon series would be shown on TV later in the year. They approached Twilight many times to knock out a game on all the major 8 and 16-bit formats in time for the TV schedule.

Andy Swann was the programmer on this particular title, and Pete Tattersall was the lone artist that created the graphics across all formats. In those early days, he was working with 4 different programmers at the same time.

There's an interesting bit of trivia surrounding the credits in the game. The Twilight team didn't want to let on that they were a very small team creating all formats of the game themselves, so made up some other names for the development team. Andy Swann became Malcom Hairdoo and Pete Tattersall became Moo Moo!

This particular title was based on a video cassette called "Yogi's Treasure Hunt - The Greed Monster".

Here are all the graphics from the game converted back to PNG images.