Yes, the Diary is back - well, you asked for it! What's more, to make up for lost time we're giving you not one, but two personal accounts of Thalamus's latest blockbuster. Covering all aspects of the game are the Rowland Brothers. They may not be as famous as the Bitmap Bros - yet - but at least they're real brothers, with John handling the programming while Steve provides the graphics. Collectively known as Apex Software they made their debut with the Sizzling Retrograde, while their previously written Cyberdyne Warrior added sparkle to the recent Fourth Dimension compilation. For the next few months they promise to divulge all the sordid details of their private lives, the development of local fast-food establishments, and maybe even something on their latest project: Creatures.

Unlike the previous four diaries (Andrew Braybrook - Paradroid, Jeff Minter - Iridis Alpha, Andrew Braybrook - Morpheus and Martin Walker - Citadel) this one doesn't pick up a game from conception as we are about a third of the way through it already. But don't worry as in this instalment we will be summarising the last few months work, taking you from the creation of the game to its current stage in development.

Incidentally the game is called Creatures, which is an abbreviation of 'Clyde Radcliffe Exterminates All The Unfriendly, Repulsive, Earth-ridden Slime' (or something like that anyway).

In contrast to our last game Retrograde (you may have heard of it, well then again...), Creatures is not an 'all out - shoot anything that moves - serious shoot-'em-up'. By the time we had complete production on Retrograde we were sick to death of alien-bashing. Creatures is a 'cute' game - with friendly, furry, fluffy little animals not butch, laser-firing aliens from outer space.

Anyway, let's get on with telling you how the game got to the stage (or should that be state) it is today...

Sometime at the beginning of January

JOHN: I now have three different horizontal scrolling methods to choose from, including one which has 'true parallax' (like Hawkeye but with a moving background, wow!). The first takes too much memory, the second uses too much computer horsepower but the third little piggy went wee wee wee all the way home! (No - stop, the men in white coats are coming). What I meant to say was the third scrolls 304 x 192 pixels at speeds of 0.5 to 8 pixels a 50th [of a second] with colour scroll on every character. Perfect! So naturally we'll make it a flick screen game instead (just kidding).

STEVE: Been sketching loads of ideas for the graphics on the first level and have since been recreating them on screen (which look totally different to my original drawings). I also designed the main character of the game and named him Clyde (and why not?).

Talked to John about changing his control mode (Clyde, not John) in different environments (eg swimming when in water, skiing on snowy mountains etc). After John picked himself up off the floor in hysterics the answer was a big 'NO WAY' but I'll keep bugging him about it. 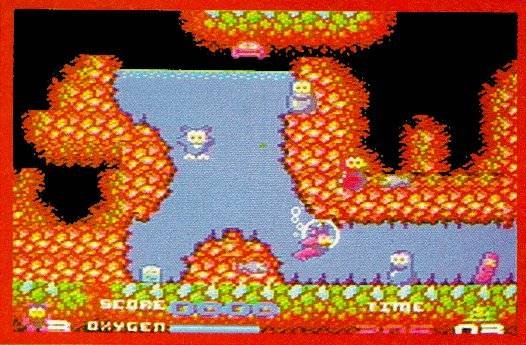 JOHN: Having finally refined the scrolling routine and uploaded some graphics we still think there in not enough colour on the screen. So, in with some trusty colour splits (as in Cyberdyne Warrior and Retrograde) which make the graphics look awfully pretty (pretty awful).

It's now time to knock up the movement of our fluffy fuzzy. We hate games which have slow, cumbersome control modes so we try to make ours as playable as possible. I've been thinking about changing his control as he goes through the game (as Steve suggested) and have decided that it's not that bad after all. Now when Clyde falls into water in gains a diving helmet (complete with bubbles) and a limited supply of oxygen. Steve is so much happier.

STEVE: I have some good news and some bad news. The bad news is our local Wimpy (in Chelmsford) is closing down, but the good news is that it's reopening as a (drum roll) Burger King (yum-yum - the best burgers about). Back to the not-so-important news about Creatures. Finished the level graphics and want to do a map so all I need is a map editor (hint, hint John). Started working on the first piece of in-game music with some pretty decent results considering it's in one voice (with two voices for SFX).

Started the second level graphics which are designed with a light blue background colour, not black as with the previous level. This looks colourful and gives a rather tasty effect of daytime. This then gave us the idea that the levels could alternate between night and day.

The beginning of February

JOHN: Took a break from the ingame routines and started the 'Get Ready' attract sequence. Instead of just the standard Get Ready most games have (yawn) I threw in a scrolling level map for good measure. So now you can get a sneak look at what's ahead (aren't you lucky?). I also put the 'music on/off options here instead of the title screen, enabling you to change the sound parameters during the game. 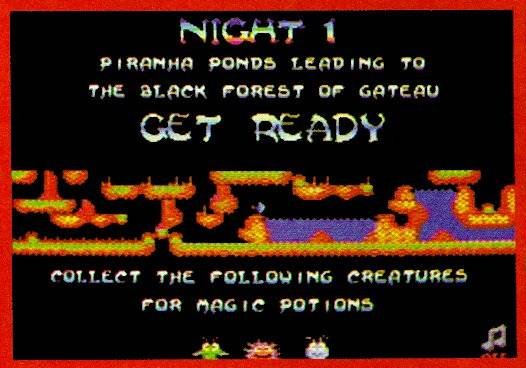 The map screen for the first level, one of the many attractive presentation screen which Apex excel at.

In preparation for a demo of Creatures I spent a couple of hours putting together a neat little front-end screen. From here you go to 'Get Ready' and then to the game itself, giving a good feeling of how the final game will gel together.

STEVE: I had to create a map of level two for the demo which meant me staying up all night working (boooorrrring). I also discovered a new way of designing graphics - with my shut (John prefers them that way). Instead of the standard single character alphabet, we added a larger size (2 x 2) as we did in Retrograde. John uploaded this and pot it onto the title screen.

About the middle of February

JOHN: I've written a little map editor for Stevie so he can create a scrolling level out of his graphics. I always seem to spend a lot a time writing editors. For Retrograde I wrote seven or eight, ranging from sprite editors to nerve-centre editors (what a big waste of time).

We finally found some poor mug to sign up our game, mentioning no names (Dave 'GTE 16V Birch) on behalf of some software company called... erm... Thalamus - that's it. (Don't know if you've heard of them - cos we haven't). Oh, by the way, some mega important news: Burger King opens soon.

STEVE: Complete the Get Ready music today which suits the part quite well. A lot of my music is influenced by (copied from) the style of music we listen to. This isn't the usual 'hippy-image' Pink Floyd type music (not that there's anything wrong with that (Jeff)) but is closer to House/Dance music, which is a good thing as half our lives are spent in nightclubs (The Dukes Experience (Chelmsford), TOTS and Mr B's (Southend), Hippodrome (Colchester) etc).

Started researching into 'cute' aliens which unfortunately meant both of us going to South-End-on-Sea and playing arcade games all day (it's a hard life - but somebody's got to do it). Spent a lot of time (and dosh) playing cute games such as Mr Wardner, Galaga '88, New Zealand Story etc. We also enjoyed playing Airbusters and Megablast (both horizontal shoot-'em-ups).

JOHN: Time to get aliens bouncing around the screen. We had to work out the approximate number of aliens which will be needed on-screen (off-screen ones won't be much good). The magic number we came up with was 15, plus the player sprites and bullets, plus the status sprites amounting to some-where in the region of 26 (which I think I can handle).

It's here at least, Burger King is open! No more trips to Southend and Leicester Square, So Steve, Darren (our chief playtester for Retrograde) and myself now have a table permanently reserved there.

Dave 'JLG' Birch came over from Reading (the location of the Thalamus HQ) together with John Wildsmith, who has the job of converting Creatures to the other 8 bit computers. The main reason for the visit was because Dave wanted our autographs (on the bottom of some contracts). But, the most important part of the day was the 'all expenses paid' lunch in (you guessed it) Burger King.

STEVE: It's time we had a new SFX editor so Rob 'squidgy' Ellis came out of retirement and accepted the task. A week or ten later we had a copy in our hands and will now use this in the game. 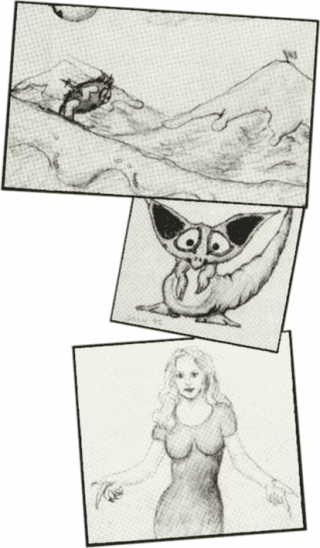 Yesterday I was doing the title music on the C128, which was being blasted from six speakers around the office, when suddenly half of them cut out. Being technically minded I grabbed a handful of cables from behind the amplifier and gave them a yank. This, however, was not a good idea as one explosion later we needed a new roof, some fresh underwear and a new sound chip. Today saw the C128 in bits and the insertion of its third SID chip.

JOHN: The aliens are coming (scream, shriek - run for your lives)! I now have all the enemy sprites moving and animating. Not only do their images animate but so do their colours (making for a pretty colourful screen). We've decided to make the aliens do more than just die when hit. We want some of them to react somehow - maybe mutate into other aliens or something (I'll have to think about this - yes, I do think every now and then).

We now know how each level is going to be structured. We're going to split, the horizontal landscape into two, and insert a 'shop' in between (oh my God, they've gone and put another shop in). On completion of the second half of the level Clyde will go into a 'Torture Chamber' where he'll see one of his mates about to die (something gruesome, like being tied to a conveyor-belt approaching a circular saw). If Clyde saves his friend he will again go into the 'shop' to upgrade for the next level.

So as you can see (unless you're blind - in which case how are you reading this?), each level is going to be quite large. We're aiming at five or six levels for the game, it's really a matter of how many we can fit on the disk (with Retrograde we couldn't fit the levels in the standard space allowed, so we had to squeeze data in areas not normally used)

STEVE: We've come up with a system to upgrade your firepower. Throughout the level Clyde must collect 'Magic potion creatures' which will be taken to the 'shop'. This will be in the form of a witch's hut. In here is a foul, ugly, grotesque witch who will, when given creatures, mix magic potions for you. There will be a selection of potions available all needing different ingredients.

Whilst glancing through the latest issue of Playboy (courtesy of playtester Darren - who prints it!) I changed my mind about the appearance of the witch. Instead of making her fouls, ugly and grotesque (like John), she's going to be a 36-24-36 centrefold (unfortunately clothed). 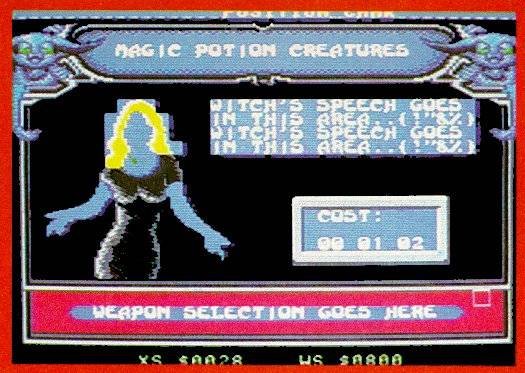 Faceless and dumb the shopkeeper still need plenty of work.

Well there you have it, the end of March is approaching and so is the end of this instalment. Join us next month when we'll be giving you a report on Burger King, The Dukes Experience and, space permitting, Creatures.