The Making of Lemmings Part 3

Disaster! We've always considered ourselves unlucky, where deadlines are concerned, but everyone spare a thought for poor old Denton Designs. Another project they're working on has been rescheduled, meaning they've had to work night and day over the past month to get it out on time. In real terms this means... no Batman diary his month! Sorry folks. Oh well - you'll just have to make do with our EXCLUSIVE Lemmings diary...

REMI: At the time of writing, the very last alterations being made on Lemmings - with any luck it'll be on the shelves by the time you get to read all this! So go out and look for it... oh, and don't forget to buy it too!

Lemmings has taken me roughly two years to complete. I first talked with Psygnosis about the C64 conversion of Lemmings at the 1991 Autumn ECTS show, and it took exactly one year for both parties (E&E Software and Psygnosis) to sign the contract needed for the conversion. It then took us another year to complete the game. During the last few months I've been very busy travelling between all the persons involved, making sure everything was delivered on time (something I obviously completely failed) but right now there's only one more visit to do (or two, or three... whatever) to be the first person with a completed version of Lemmings - boy, will I be glad it's over! You may think it's great to produce a game and see it grow and progress. Take it from me - after a few months you consider it your job, instead of your hobby, and in the end you feel glad when you finally finish the game. Still, the most recent sections I've seen are nothing short of brilliant - it's without a doubt the best 8-bit version ever made, and even gives several 16-bit versions a run for their money. This is going to be THE smash hit for this Autumn/Winter - as well as 1994, 1995... and so on! When I last called the Rowland Brothers, they mentioned Mayhem In Monster is nearing completion as well - as funny as it may seem, both the games will be completed at the very same time! But (hopefully) Psygnosis will be a bit faster with the duplication and distribution of the game, which gives us a (small, but important) head start. The coming months will be very interesting for both the teams - which game will top the charts? Obviously. I hope it'll be Lemmings - but 'hi' to John and Steve, anyway. 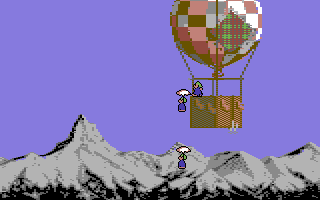 Fewer lemmings fall out of the balloon than on the Amiga

THOMAS: This month I've been doing some last minute checking on most of the routines, as well as finishing the intro. It's almost exactly the same as the Amiga version, but because of memory imitations there aren't as many Lemmings falling out of the balloon. In the Amiga version, the balloon scrolls onto the screen before the Lemmings drop out, but on the C64 it'll be on the right spot from the beginning. Of course, the most obvious change is at the end of the intro - on the Amiga, the screen zooms out to show the Lemmings logo. This zoom alone would fill up the memory of your C64, so I decided (wisely) to swap the pictures instead of including the zoom. I also had to change some of the graphics due to memory restrictions, as the animations started to take up too many sprites - in the end, I had to rearrange some of the frames of animation Allain drew. The sprites are made up of of two parts. The first layer is in multicolour lower resolution and features the colours blue, pink and green but is rather blocky. That blocky bit is removed by the second layer which is placed over the first one; it's single colour hi-res, and a lot smoother, The actual animation is now drawn in black-lines - just like any cartoon you see on television. By putting the second layer over the first one (perhaps that's why they call it overlay-sprites) you get the colours of the low-res spriites, and the smoothness of the hi-res ones. The only negative point of this technique is that it uses twice as many sprites as it would with the low-res ones.

Another thing I've been working on is the loader. I've had no problems with the disk loader, as I've programmed disk-based games before, but as we're catering for tape users as well I had to look for a tape multiloader too.

After some deep digging, I finally found an old tape loader called 'ABC Turbo', written by some dude from the PD scene. I've now come up with a very short routine which should work perfectly for Lemmings. Now I only have to write a small tape mastering program to convert the disk version to tape. 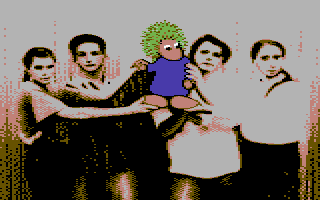 The only thing left for me to do is the endsequence, which we discovered when we had the game half-finished. The original Amiga sequence features a picture of a lemming surrounded by digitised pictures of the team responsible for the game (DMA Design, fact fans), as well as a sampled applause - we decided to do the same, but with our pictures.

After we'd taken photographs of ourselves standing around a box (which doesn't even slightly resemble a lemming, but was the first thing we found that was the right size after Jeroen's cat escaped!) we spent the rest of the day sampling our cheering, clapping, stamping and whistling - the result is great! But you have to work yourself through 100 levels before you can witness this marvellous peice of programming (heh heh!).

Anyway, despite the fact this conversion's been a real pain in the ass for me, it'll be - without a doubt - the most technically - advanced C64 game ever, and certainly worth the trouble... 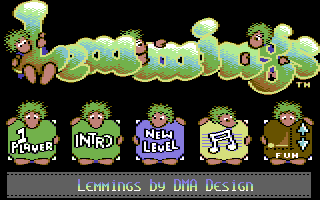 LEON: My most important work this month was the menu, as it had to look great and be finished quickly. I'm happy with the end result - it's fully animated and exactly the same as it's Amiga counterpart. Well, to be honest, not quite exactly. On the Amiga there's a scroller at the bottom of the screen, activated by two small lemmings turning a wheel which makes the scroller... erm... scroll. The original idea was to include them, but to do so I had to have the original lemming animations. Predicatably, these are around 200 kilometres away at Thomas' place - to go over and collect them would take too much time, so we decided to leave those out and have an 'automatic' scroller. You probably think my job's done, but that's not the exact truth, as I still have to do eight more levels to complete (don't tell anyone!) but Thomas assures me that they shouldn't be a problem with his editor. Once I've finished those. I can finally start working on the last two pictures for Lemmings. Lemmings has been an experience for me, as it's the first big (and I mean BIG) project I've been involved with. If you compare C64 Lemmings with other 8-bit console versions... we've wiped the floor with them. I'm looking forward to doing more work with the Commodore, y'know...

JEREON: I'm very happy to have worked on Lemmings, as it's THE most eagerly-awaited game on the C64. And I'm impressed by Thomas, as out of all the people to have worked on Lemmings he's the one to have made the impossible possible! My job was to convert the music - something I've done - for a lot of games - but you won't find my best work in Lemmings. It's not that I haven't done as much as I could, but let's face it, it's conversion work - something that would limit anyone. In total I've finished nine level tunes with sound effects, and if it wasn't for the memory restrictions I would've produced some 'Let's Go' and 'Oh No!' samples as well. All the tunes are conversions of the Amiga music, but only use two voices, as I had to leave the third voice open for the sound effects. I still think I've done a good job... Sadly, as the music is the smallest part of the game (I get equally well paid though, heh heh) there's not much else I can say - oh, and I've to pack for a small business trip right now. To me, Lemmings has been a fun project to do, and I'm proud to have my name in the credits. 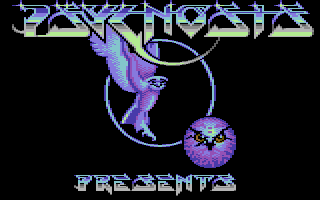 REMI: Well, that's the end of the third and last part of the Lemmings diary. I'd like to thank all those who have been involved in its production, but limited page space stops me from doing so - the list would easily need an extra page. I'll just leave it with the man who deserves it the most, a man who has done everything possible for us and the conversion of Lemmings - Greg Duddle! He's the producer from Psygnosis, who's had to listen to all our excuses, delay lies, stories, and much much more, while having to report all that to the big bosses - in other words, his ass was on the line if we decided to take a vacation to Hawaii instead of working on Lemmings. So a very big thank you to Greg. and a very big goodbye to you readers. See ya!

All good things come to an end, but wait - it's not over for Lemmings yet. Next month we'll have, a massive review of it, so restrain any suicidal urges 'till then, okay?