Far, far into the future in a dim distant galaxy a fleet of Robo-Freighters were making their way to the Beta Ceti system when disaster struck. The ships ran into an uncharted field of asteroids and were bombarded by powerful radionic beams. While these rays didn't actually affect the ships In any way, the robots, and consequently the human crew members, weren't quite so lucky. It later arose that the robots' circuitry became scrambled whilst travelling through this field, rendering them hyperactive. This resulted in every living crew member in the fleet being eradicated by the now psychotic robots.

To make matters worse, eight of the ships were last seen breaking away and heading for enemy space. Should the Droids fall into enemy hands then they could be used against man to cause his ultimate downfall. The only way to prevent such a disaster from occurring is by destroying every last robot present on the renegade freighters. 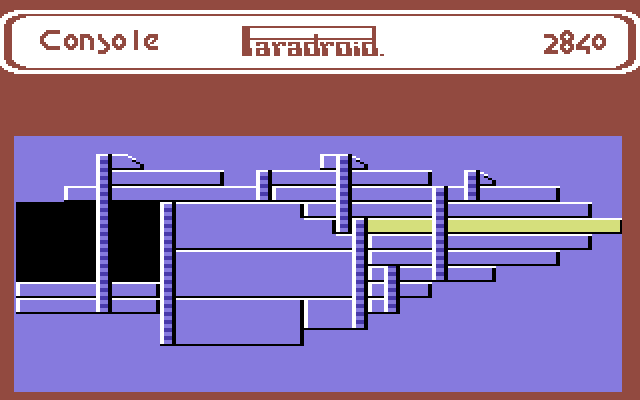 Side elevation of the space freighter 'Paradroid', showing the deck levels (the pale blue line indicates the level you currently occupy), and connecting lift shafts.

A prototype Droid, known as the Influence Device, has been placed under your command and since docking was out of the question, it was beamed aboard the first ship, the Paradroid (hence the title of the game). This Droid is a effectively little more than a self-sufficient helmet, possessing its own power supply and armament. It has the unique ability of being able to temporarily take full control of any robot, maintaining all the working functions of its new found host In the process. Naturally the host robot objects to this "intrusion" and attempts to resume its normal operation. This leads to the device 'burning out', so in order to survive for any great length of time one must change hosts regularly. To do this one has to gain control of the relevant robot's microcircuits. Failure to do so results in the destruction of your 'host' and ultimately yourself.

By centering the joystick and holding down the fire button you enter Transfer Mode. This enables you to interface with a Droid of your choice by ramming it, and initiates the transfer sequence. On merging with a robot you are reminded of the device you currently control and informed of the one you wish to take over. You are then presented with two sections of circuitry containing twelve wires from both yourself and the target Droid. One must select which side, and therefore colour, is going to be advantageous before a timer counts down from 99 to zero. 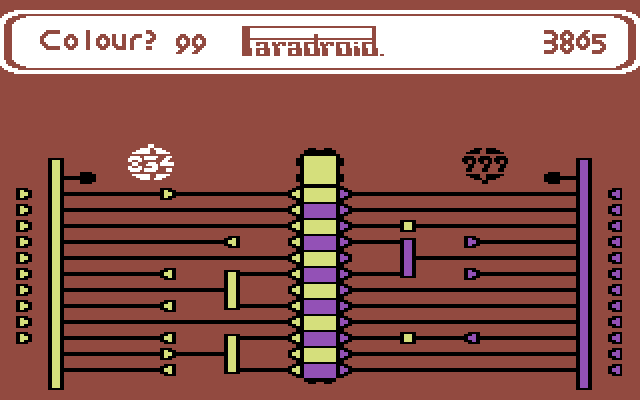 The Transference Game - the influence Device is attempting to take over a Class 9 Command Cyborg, but first he has to select his colour... the Pulsars are shown down the side.

Some of the wires lead to a central bar composed of twelve blocks in one of three ways, while others, known as Terminators, don't actually reach at all.

The object of the exercise is to set at least seven of the twelve blocks to your chosen colour within a given time limit of 99 units. This is done by strategically sending Pulses through the wires and Into the blocks, the quantity of which depends upon the class of robot in your possession. If neither Droid has the advantage at the end of a 'bout' then a Deadlock is called and the battle has to commence once more with different circuits. There's more sophistication involved than suggested here, but the game instructions covers the process adequately. 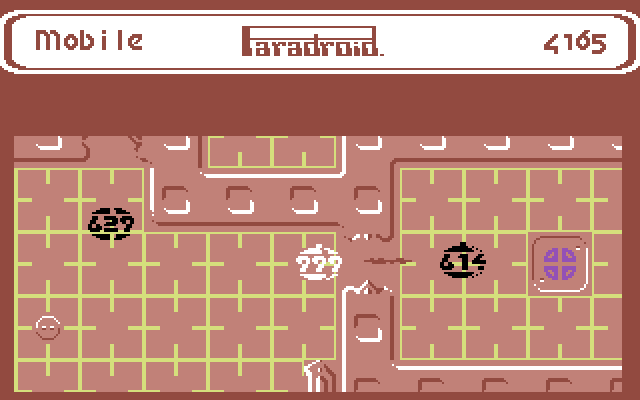 We're looking vertically down onto a section of a deck floor. The Influence Device is now in possession of a Class 9 Command Cyborg (seen centre of playing area).

Unfortunately, the Influence Device has some limited capabilities and it can only transmit details of its immediate surroundings back to your screen, ie anything within its own visual range. A large majority of the decks are larger than a single screen, so each is viewed through a multi-directional scrolling window. One critical defect of the optical sensors used in the Influence Device is that it can't see around corners, obstacles or through walls. This gives rise to what can best be described as a sort of three dimensional view in two dimensions.

There are several different deck layouts, most consisting of many smaller rooms with sliding doors that open when a Droid is in close proximity to them. Some sections are nothing more than a single location while others, such as the cargo bays, contain wide open spaces leaving you vulnerable to attack. There are eight lift shafts and many access points spread throughout the ship, allowing you to freely travel from floor to floor.

By logging on to one of the many consoles about the ship one can access the Droid Data Library. This contains useful information on all of the robots, including details on physical attributes, such as height, weight etc and other relevant characteristics. You are restricted though, in that you can only view data on robots of a lower rank than yourself, due to the fact that access is determined by the host Droid's security clearance. 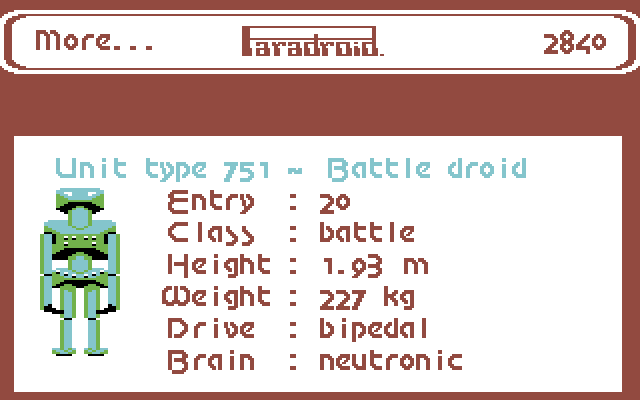 Droid Data Library. They sure are a mean looking bunch!

There are 24 different types of Droid, each with their own personality and these are divided into 9 classes: Disposal Robots, Servant Robots, Messenger Robots, Maintenance Robots, Crew Droids, Sentinel Droids, Battle Droids, Security Droids and the 999 Command Cyborg. The latter is the most powerful of all robots and can only be taken over for a very short period of time. There is only ever one Command Cyborg per freighter. The robots are represented on screen as a three digit number, the first showing the class of Droid and the other two merely indicating rank.

While accessing the console it is also possible to view a plan of the deck you are currently inhabiting or a side elevation of the ship. The former shows all elevators, consoles and energisers present on the deck while the latter is a simple representation of all decks and the lift shafts adjoining them. 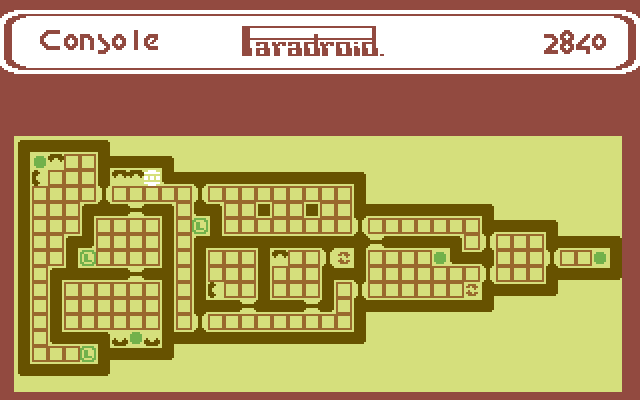 A plan view of a deck, showing lift access points, consoles and energisers.

Droids can be destroyed in one of three ways: by ramming, shooting or transferring. The first method is only really viable if you are in possession of a well armoured Droid, since you can be considerably weakened on ramming. Shooting is the quickest and easiest way of disposing of a Droid, higher ranks requiring many hits for complete destruction. Some Droids fire back so the utmost caution should be exercised when attacking one in this manner. Finally, the last approach, transferring, gives rise to a game of its own as previously mentioned. If you eliminate several Droids in a short period of time the alert status rise and then you can score more for each 'kill'.

On completely clearing a deck of all Droid activity the lighting system shuts down, plunging the entire floor into semi-darkness, and you receive a small bonus. When you finally clear all twenty sections of the ship you are given a hefty bonus, a congratulatory message and you are beamed aboard the next freighter. Finish all eight freighters and... Well, any offers?

This has to be the best combination of shoot em up and strategy in a game that I have seen to date. Even if you put aside the excellent graphics and impressive sound the gameplay elements are astounding. When you first start to play, the immediate reaction is to clear as many decks as possible, ie wipe out the little droids and then move on to the harder decks. Soon you realise that this isn't quite the best way of achieving the awesome task of clearing all twenty decks.

I found that trying to blast away the higher droids meant getting zapped back into a 001 influence device often, making it very hard to find anything to take over since I'd wiped out all the easier influenced droids earlier on. This happened quite frequently so now I've found that the best strategy to adopt is to clear as many of the more difficult decks as possible, then come back for the easier ones.

The overall ship design amazingly well thought out with cargo decks and shuttle bays. Every class of robot having its own personality and movement pattern adds a great deal of atmosphere to the game.

When Paradroid finally arrived in the office I wondered if it would be as good as Gribbly's and whether after three months of build up the game would be a flop. I needn't have worried - it's absolutely superb!

The first thing that strikes you are the stunning graphics. These are tremendously effective and give the game a fantastic spaceship atmosphere, working perfectly in tandem with the wonderful sound effects. These too, add to the general feeling of exploring a hostile future space environment (listen to the robot conversation on the title screen too).

The gameplay is marvellous, with a nice 'feel' as you zoom around the ship, especially when you become an 'eight' class robot. The transfer game is great fun to play on its own and there can be some rather tense moments (especially when you try to no from 001 to 883)! The really good thing about the transfer game is that with practice you can make really huge jumps in robot classes once you have become proficient.

Overall Paradroid is one of the best programs I've seen on the 64, and is one that has been keeping my interest for several weeks, something that a game hasn't done for some time. The challenge of clearing all eight ships is immense, end even if you do solve it there's always the possibility of bettering your score to keep you going back to it.

There have been several new approaches to a shoot am up before, but none have been quite so stunning as Hewson's Paradroid. The very first time I loaded the program I was overawed by the amazing presentation and the scrutinous attention to detail that the programmer, Andrew Braybrook, must have gone to such lengths to achieve. Such subtleties as not being able to 'see' around corners and pillars in plain view and the ability to call up information on the different classes of robot make Paradroid the best presented game I have ever seen. The use of the humble joystick is just as impressive - the several functions available being accessible with startling ease and little or no confusion.

Although the scrolling window technique used in Paradroid is similar to that of Andrew's previous game, Gribbly's Day Out, it is in fact better. It's just so fast and smooth, with no noticeable screen glitch at all... Marvellous! The graphics are of the same quality as the presentation with brilliant and effective use of the bas-relief technique, giving an excellent metallic and atmospheric look to the ships. The robots are just as well defined as the 'scenery' and the use of colour Is exceptional all round. Each robot has been so well designed and implemented that they really do have individual character.

For a game of such complexity, Paradroid is 'friendly' and easy to get into. The inlay instructions are concise but comprehensive and the information contained within the program complements them perfectly. In this game the blend of strategy and arcade action is quite unique. Gribbly's was great but Paradroid... For once words fail me!

Immaculate. Faultless in appearance and execution with excellent use of joystick.

Stunning bas-relief effect. Brilliant definition and use of colour all round.

No music, but incredibly effective and atmospheric beeps, whoops and the like to compensate.

Virtually enforced addiction as you attempt to clear the first ship...

... and once you've cleared that there are still seven more to go!

It's been worth the wait and it's definitely worth the money.

THE classic shoot em up.