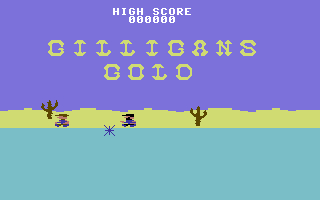 Gilligan's Gold was a ripoff of the 1982 arcade game Bagman, and released by Ocean Software in 1984. The original C64 cassette release features an amusing abusive message that was meant to only be seen by anyone attempting to crack the game.

In the early days, a common way to crack games was to force a soft reset of the C64 by shorting pins on either the serial port or the user port. If certain vectors were set, the soft reset was able to execute code somewhere else in memory.

In the case of Gilligan's Gold, the soft reset would cause a hidden message to appear on the screen, and the reset procedure would continue. The normal reset procedure causes the screenmode to instantly reduce to 38 column mode (thus cutting off 2 of the characters), but most of the message would be visible for a couple of seconds.

The fatal flaw in this plan was that the loading system also calls the exact same reset routine if it detects any kind of load error. The first batch of tapes were poorly mastered, causing the message to appear for people that had legitimately purchased the original game. 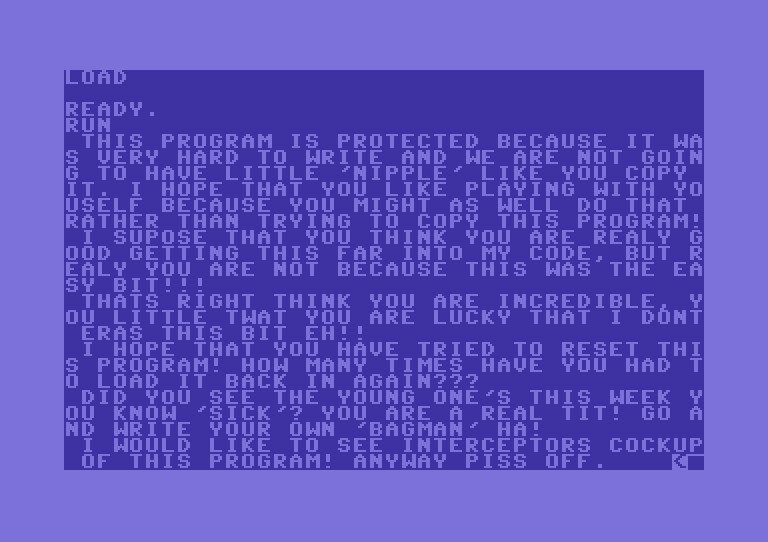 THIS PROGRAM IS PROTECTED BECAUSE IT WAS VERY HARD TO WRITE AND WE ARE NOT GOING TO HAVE LITTLE 'NIPPLE' LIKE YOU COPY IT. I HOPE THAT YOU LIKE PLAYING WITH YOUSELF BECAUSE YOU MIGHT AS WELL DO THAT RATHER THAN TRYING TO COPY THIS PROGRAM! I SUPOSE THAT YOU THINK YOU ARE REALY GOOD GETTING THIS FAR INTO MY CODE, BUT REALY YOU ARE NOT BECAUSE THIS WAS THE EASY BIT!!!

THATS RIGHT THINK YOU ARE INCREDIBLE, YOU LITTLE TWAT YOU ARE LUCKY THAT I DONT ERAS THIS BIT EH!!

I HOPE THAT YOU HAVE TRIED TO RESET THIS PROGRAM! HOW MANY TIMES HAVE YOU HAD TO LOAD IT BACK IN AGAIN???

DID YOU SEE THE YOUNG ONE'S THIS WEEK YOU KNOW 'SICK'? YOU ARE A REAL TIT! GO AND WRITE YOUR OWN 'BAGMAN' HA!

I WOULD LIKE TO SEE INTERCEPTORS COCKUP OF THIS PROGRAM! ANYWAY PISS OFF.

After "feedback" from customers, Ocean re-mastered the game using the Novaload system and removed the abusive message. The story of this fiasco was repeated occasionally to new staff members joining Ocean as a reason to never include "clever" messages such as this!

To replicate the message yourself, LOAD the tape image in WinVICE and wait until the tape counter reaches at least 18. Perform a soft reset (by pressing Alt-R) and the message will appear. If you quickly pause the emulator (pressing Alt+Pause), you can read the entire message, except for the rightmost couple of characters that will be cut off. If you reset the game too early, only part of the message will be visible.