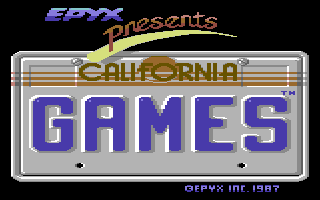 Chris Wilkins and Roger Kean's book The Story of U.S. Gold features a fascinating history of the U.K. software publisher. The "Memories" section of the book features interviews with over 30 people that worked with U.S. Gold over the years, including some of the Epyx developers.

One of the most interesting interviews is Chuck Sommerville, who programmed the MCP (Master Control Program) along with the skateboarding event for the C64 version of California Games. In the interview, he made an outrageous claim about the copy protection. Upon reading, I immediately thought, "This cannot possibly be true" and have done a bit of research to check out his claims.

The section of the interview regarding the copy protection states:

With California Games, copy protection was taken very seriously. We used Epyx's new disk copy protection system called Vorpal Loader and as we developed our separate events we made sure that the loader was still installed in our code. If it was not, the game gradually degraded until it became unplayable in different and devious ways.

We wanted to make sure it was the best game copy protection ever - and it was. In standard software you could not copy the disk because you needed Epyx's enhanced 1541 drives to make the copy.

When US Gold came along, their distribution model was not like ours in the States where disk was the platform of choice - they wanted cassette. We said that we could not do that as the copy protection would not transfer across. Our marketing department said tough - so we had to provide US Gold with the source code so that they could modify it to work on cassette. That cassette release was the source of all known pirated copies of California Games - the disk version even today has not been pirated due to the excellence of the copy protection. We have to thank US Gold for the dent in our sales.

Cassette games were extremely unpopular in the USA, and as far as I can tell, California Games was only released on disk in the USA. A UK version of the game was released on both cassette and disk by U.S. Gold for the European market.

If you believe Chuck's story, every cracking group that has released the game obtained the PAL cassette version, and created a disk version by ripping the files and replacing the tape loader. This is simply incorrect! 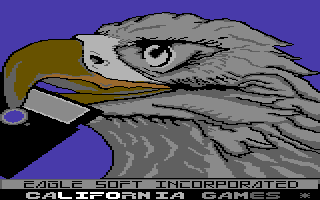 The pirated copy of the game that every C64 owner seemed to have was the Eagle Soft version, released on the 15th of July, 1987. The lead cracker of Eagle Soft Incorporated was an American using the handle Mitch, who has been interviewed in the past. To begin, let's get the cracking from tape myth out of the way from an interview in Recollection by Jazzcat:

Jazzcat: Did you crack from both tape and disk?
Mitch: No cracking on TAPE! Tape wasn't big here in the states...

Jazzcat: Epyx really got a belting from you guys!!!
Mitch: Indeed they did. :)

Epyx were the main company that were targeted and ESI literally snatched and released all their titles. Most of the games released back then were cracked by Mitch, and in some cases other crackers in the group such as Kombalar (Chris) and Mutant-X (Tom). Their main supplier during their most active year (1987) was the group SOHO (Suppliers Of Hot Originals) and of this group the supplier was Tinman (Charlie), who later joined ESI in 1988 (a subtle way for ESI to eliminate supply to other groups also).

Tinman (Charlie) supplied originals not only to ESI, but also to UCF, NFI, and NEC. Tinman's store, The Great Escapes, paid extra to have the originals express-posted to his store so that the groups he worked with had a 1-2 day advantage over the competition.

It would make no sense at all for the original supplier to pay extra money to have games posted express to his store if Mitch had to wait for a cassette version to be released in Europe! The reason ESI was able to release all the Epyx games so quickly was because the disk versions were released in the USA first. 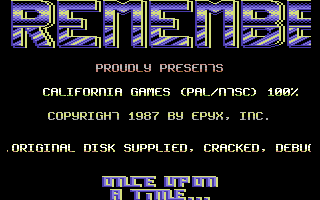 In 1998, Jack Alien of Remember released a 100% version of California Games, and the cracktro states that it was cracked from disk:

"Original disk supplied, cracked, debugged (colours in the picture in the surfing event and one lame rasterbug in the roller skating event!), levelpacked and documents typed by Jack Alien!"

This is surely more than enough evidence that Chuck Sommerville's statement is incorrect. It would not be the first time that a programmer has over-estimated the strength of a copy protection system, as the cracking groups are usually using techniques that the original authors have never thought of.

To find out how difficult the Vorpal copy protection system is to a cracker, I asked a cracker from the group Nostalgia what he thought about this claim:

As far as I know California games crack from Eaglesoft is from the disk version (ESI never cracked from tape) and vorpal is definetly not the best protection on c64 :) I am pretty sure what is said there is a bit of a stretch :)

Although Chuck Sommerville is correct in saying that the Vorpal protected disk is very difficult to duplicate, there is absolutely no need to do this because crackers remove the protection checks from the code and replace the loader. Once this has been done, the cracked version is simply a standard format disk containing files that anybody can copy.

The protection is used to protect later Epyx games such as California Games, Legend of Blacksilver, Championshiop Wrestling, "The Games" Summer and Winter Editions, LA Crackdown, and Street Sports Basketball.

Each game in that list has been successfully cracked, so the later iteration of Vorpal is not the "impossible to crack" system that has been claimed.

If the crack intros were not enough to convince you, another dead giveaway is the different menu used by the various versions. The original USA disk version along with the (identical) UK disk version contain 6 menu items, but the cassette version only features five. The option to view the title screen has been removed from the cassette version, as that would require rewinding the tape to the very beginning to view it (and who would want to view it multiple times!) 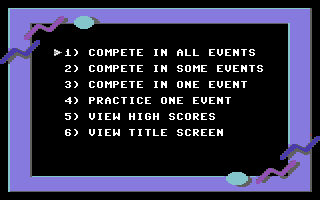 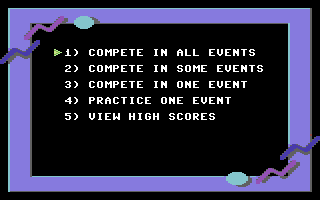 If you load both the Eaglesoft and Remember versions of the game, you will see there are six menu items, meaning the disk version was used as the original source for cracking the game.

On cassette, only Epyx and Ocean Pacific remain from the disk version, with the other sponsors replaced with Burton, Rad Mag, Bluebird, Pacer, Morey Boogie, Frisbee and Hacky Sack. 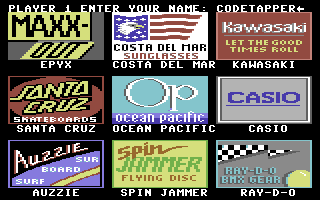 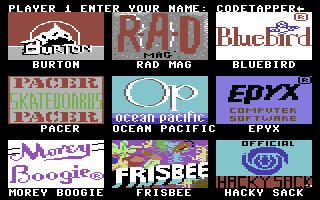 In the skateboarding half pipe event, the sponsors in the background vary on the two versions. On disk, you can see Santa Cruz, Ocean Pacific and Spin Jammer. The cassette version features Pacer, Rad Mag and Spin Jammer (which is a strange choice considering it was not one of the sponsors!). The cassette version also features what appears to be a pile of mud above the timer that is not present in the disk version. 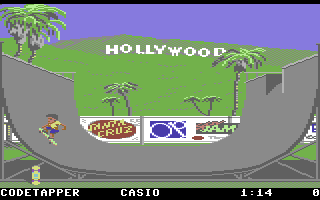 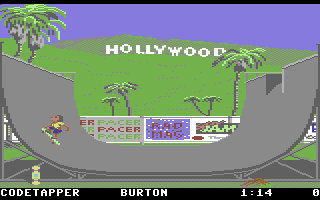 If you load both the Eaglesoft and Remember versions of the game, you will see the same set of sponsors from the original disk version.

The only version that has been definitely been cracked from cassette is the Epyx Games Collection (easyflash) version by John64 that was released in 2012. On the Lemon64 forums, he explains the reason why the sponsor logos were different:

I never noticed this :) I didn't have a California Games disk original so I used my original tape version for the crack. I made a scan of the tape inlay. On this inlay the names of the companies are summed up and it seems they even gave some prizes away.

I think we can safely say "case closed" on this myth. Chuck Sommerville is mistaken if he thinks that the only reason a cracked version exists is due to sending the source code to US Gold to create a tape version!

Here is the Chuck Sommerville interview taken from The Story of US Gold, available to purchase as a PDF or a book from Fusion Retro Books. 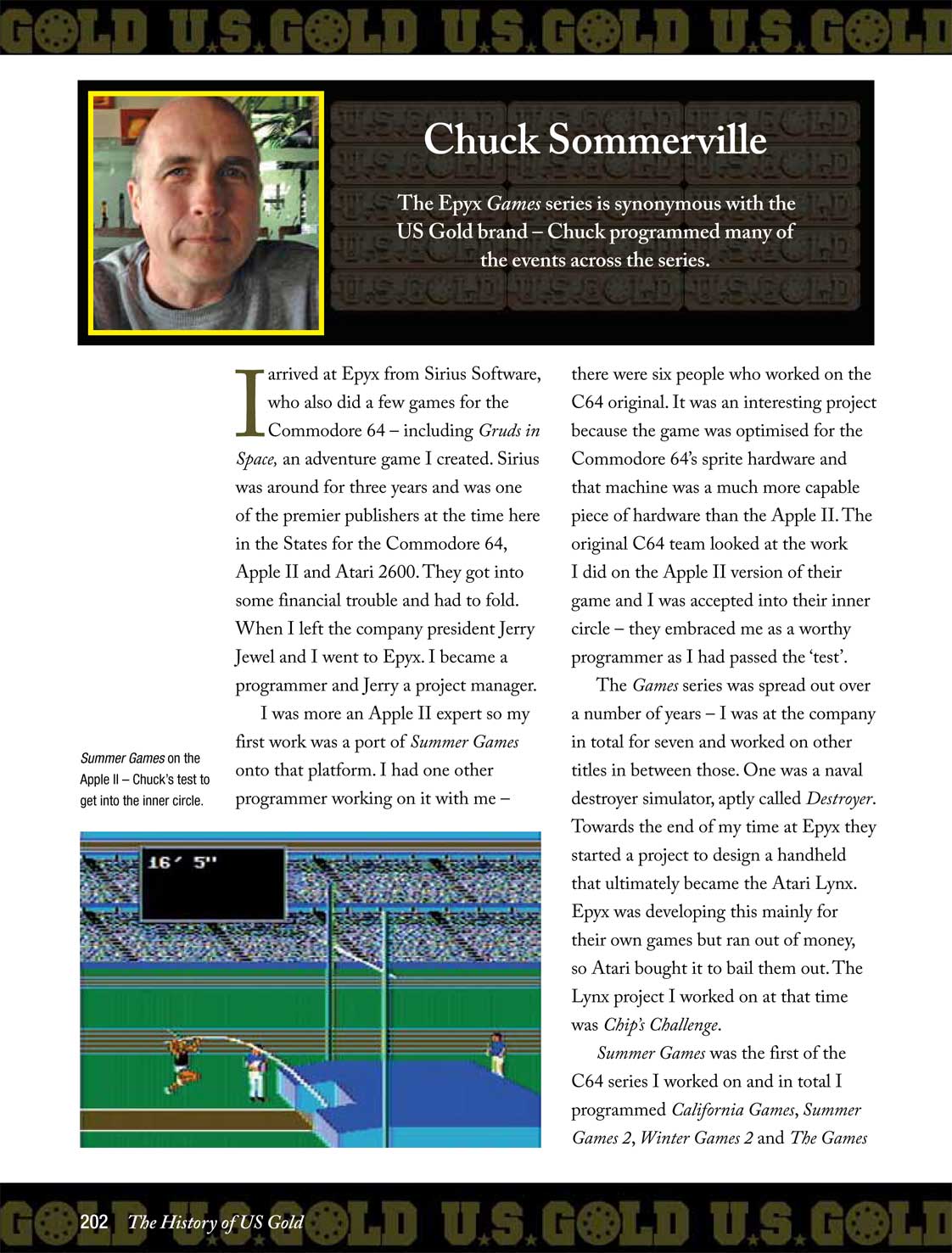 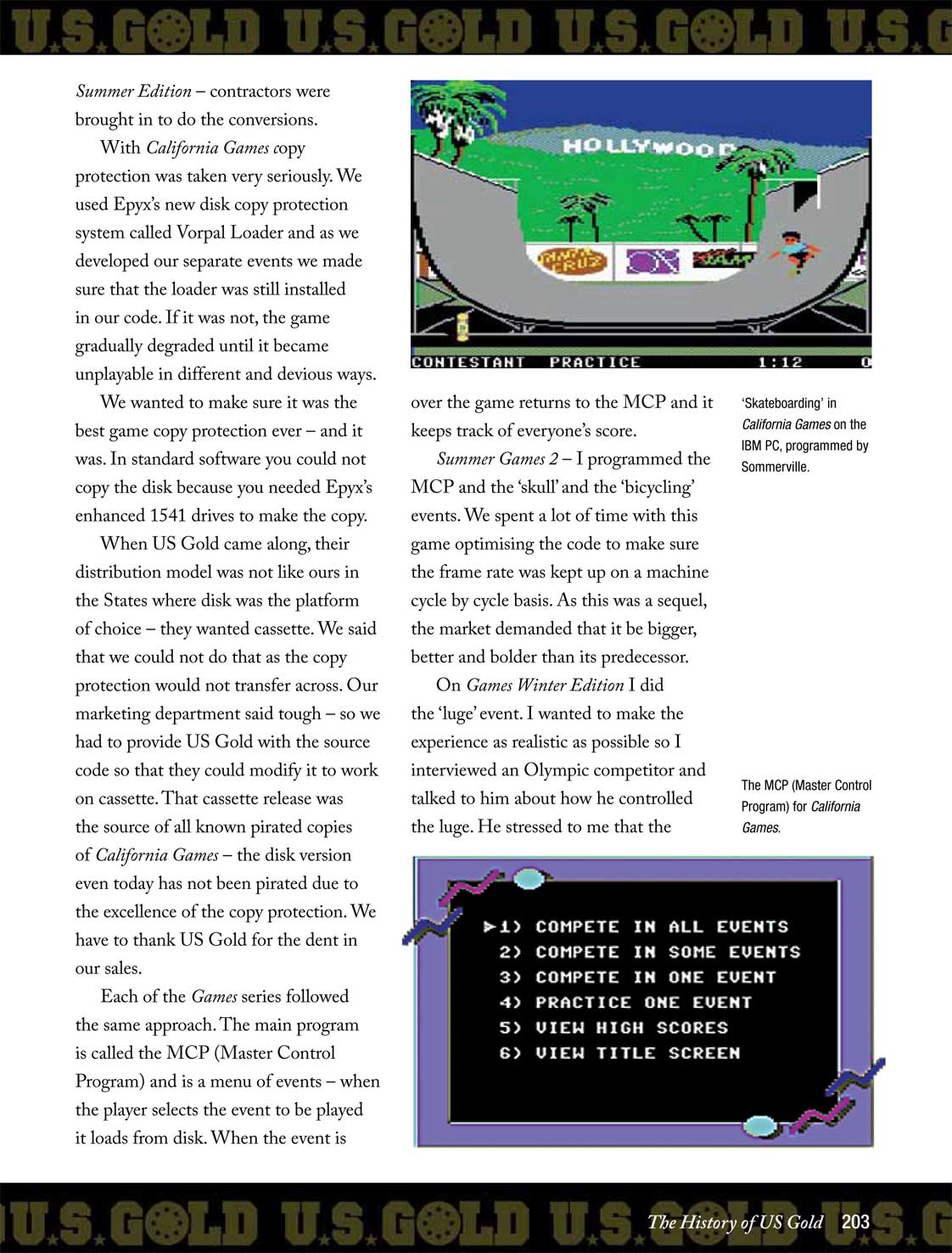 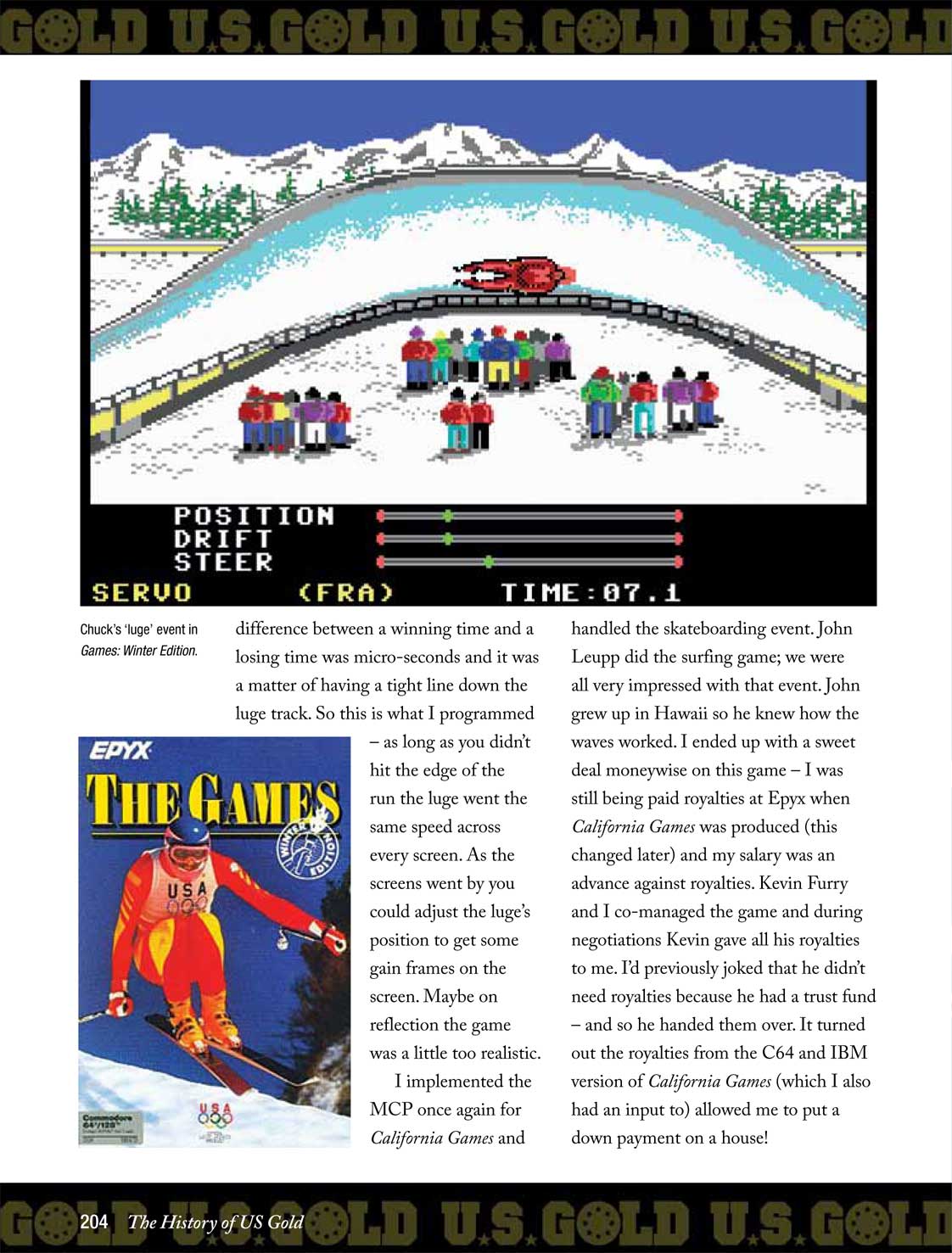 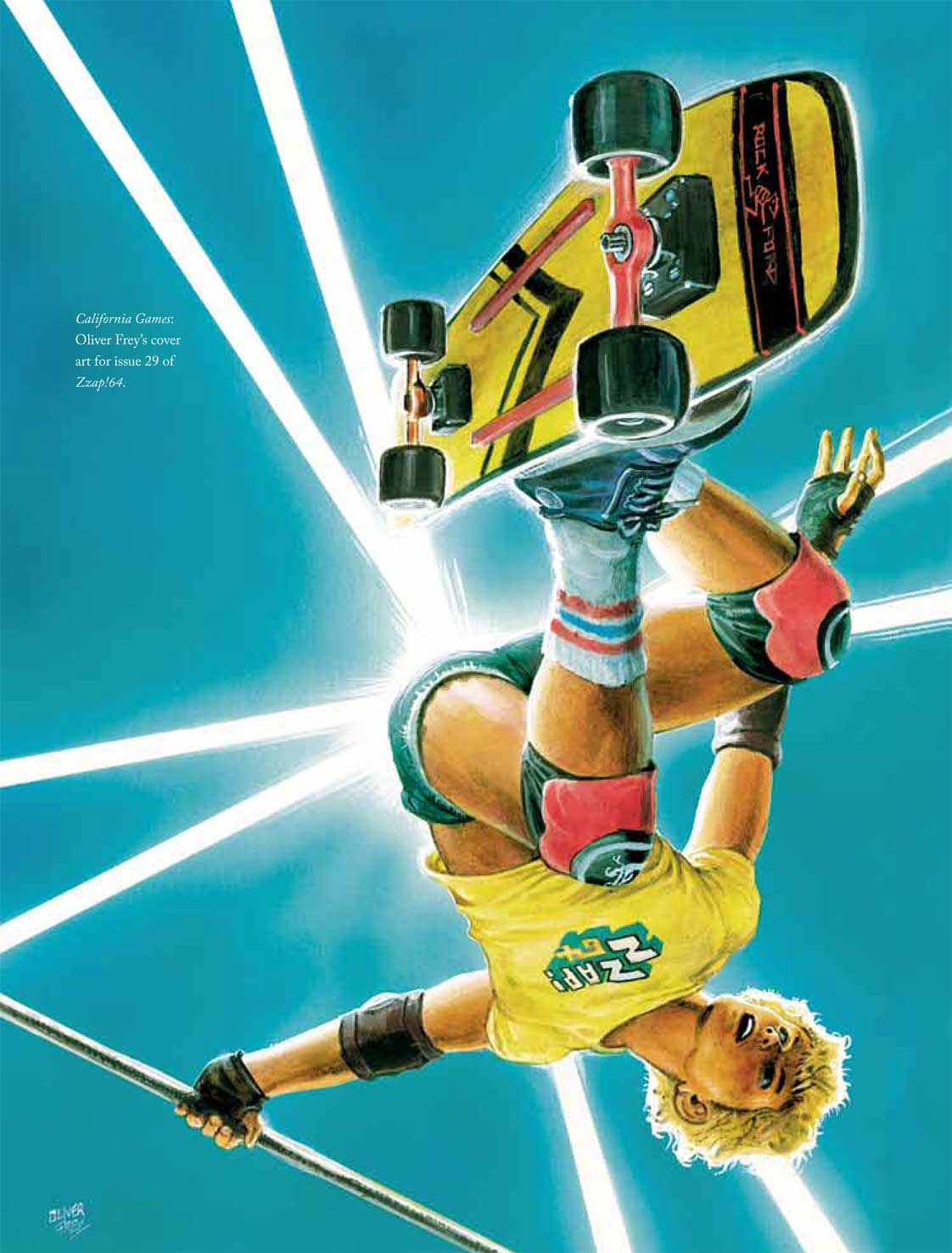