Once you've seen one football management game you've pretty much seen them all. But this latest one from Cult (they've already released a good half dozen) is so old hat it should be in a millinery museum. 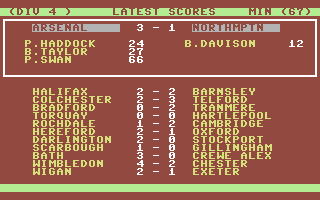 You get to manage a rubbishy Fourth Division side with the aim of getting promotion in the League and winning the FA Cup. There are the usual footy management features like picking your players for the match, buying and selling players, and managing the club's finances.

Presentation is basic with no match graphics; not even a text description of the action. No, you just sit there waiting for the score to change. You don't even get to put substitutes on, so you might as well just see the end result. Except you're not allowed; you are forced to watch the clock counting away the minutes.

The original Football Manager was released well before ZZAP! existed, and it was still miles better than this. As far as I'm concerned, this is non-league material.