After a lifetime of travelling, the circus strongman, Jinborov Karnovski, has returned to his home village of Creamina, secret resting place of the Treasure of Babylon. His dreams of a quiet retirement are shattered by the arrival of Ryu, an evil Wizard, who steals the treasure and populates the village with his eldritch minions.

Enter Karnov, stage left. With the ability to breathe fire he's the only one able to save the world from enslavement; but first he requires nine pieces of a lost map to guide him to the goal. These are gathered automatically on completion of each multiloaded level; when the map is pieced together the dark wizard himself is defeated for victory.

The landscapes are-composed of rocky outcrops, tunnels and buildings, each level containing different routes to its end. These are guarded by a variety of monsters, ranging from scimitar-wielding foot soldiers to fire-spitting columns, all of which are dispatched with sufficient firepower. 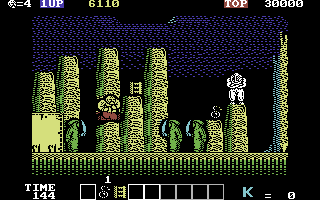 Cryptic clue no. 279: that ladder will help you to aspire to a better weapon... 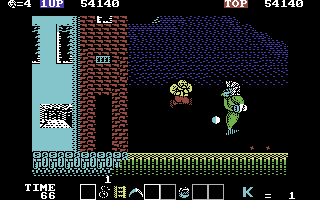 Items collected endow the strongman with special abilities, some only accessible with the aid of a ladder. Single letter 'K's are found dotted around the landscape, 50 of which reward the player with an extra life to add to the initial five. Apples give the player extra firepower, endowing him with multiple bullet sprays. The remaining nine objects are icons which are collected for use later in the game: they appear in windows at the bottom of the screen, the currently active icon highlighted. Boots double Karnov's jumping power and help him run faster; bombs are used against monsters and obstacles, but blow the strongman up if he stands too close. Ladders are useful for accessing obstacles normally out of reach or for scaling precipitous landscapes; boomerangs act as a re-usable super-weapon and flames give Karnov superior firepower for a limited time.

The last four icons are made available only at the appropriate time: wings endow Karnov with flying abilities, a swimming helmet allows him to swim faster, the mask of perception renders previously invisible icons visible and a trolley is used for downhill travel, killing all monsters in its path. 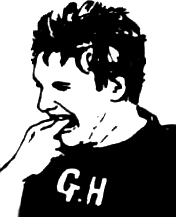 The only things saving this from a total slamming are its gameplay elements: the wide range of weapons available and enemies to bash coupled with the ability to take different routes through the landscapes. The rest is utterly dire. Presentation is poor: no title screen, long delays between deaths and an awkward control method, with the multiload just rubbing salt in the wound. If you thought that was bad, wait until you see the graphics in motion — the scrolling is limited, sluggardly and jerky, and the collision detection is appalling. More positively, you can shoot characters not yet on screen, at least providing some buffer against the unfair and unlucky odds weighted against you. If this had some appreciable sound and had been as graphically appealing as Ghosts 'n' Gobiins, it would be brilliant. It's not. 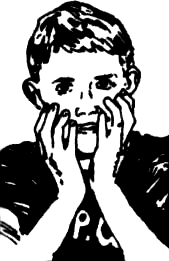 It's a thankfully rare occurrence to see a program ineptly executed on a machine it's well suited to. Note the launch date of Karnov in your diary then, because this is one such game. Considering the ease with which a programmer can achieve smooth scrolling on the Commodore, it's criminal that the people responsible for this release felt it good enough to let the sprites and scenery shudder about like a heart disease sufferer who's had a joy buzzer fitted instead of a pacemaker. Collision detection is hopelessly inaccurate, death being prompted by any hostile within a character square of the bouncy Cossack, and the decision to use high-res single colour mode is highly dubious because colours end up clashing left, right and centre. In fact, this, and the reduced screen format make it looks suspiciously like the Spectrum version has been transferred directly across via some kind of interpreter program, which is slowing the game down to concussed tortoise speed. There was a good game in there somewhere but it's been drugged into a shambling stupor by inept execution. 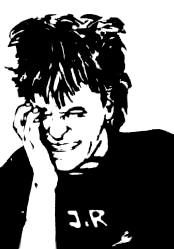 I had the shock of my life when this loaded — a 32-column Spectrum screen, complete with garish colours and horrible attributes glared at me. When I started play I had an even bigger shock — Electric Dreams have ported across the Spectrum version of Karnov lock, stock and barrel. The game plays at a stupidly slow pace, and Kanov is incredibly sluggish to respond to the joystick. Worse still is the 'scrolling'. Apart from it being amazingly slow, it's also juddery and the action sometimes stops when the screen moves — now there's something I haven't seen since 1982! The graphics are exactly the same as the Spectrum, complete with colour clash — can you believe that? Just to add that extra touch of finality, the sound is also just like a Spectrum — the weak tunes and flatulent effects do nothing to add to the atmosphere. All this could be partially forgiven if the gameplay was any good, but unfortunately the speed of the action ruins any enjoyment, and instead the game is almost instantly frustrating. Ropey collision detection and hopelessly long pauses between lives only hammer home these inadequacies. The ghastly multiload is the final nail in the coffin, with the cassette version taking an age to load the next level. Karnov is a great disappointment, and I hope Electric Dreams don't continue to port over Spectrum conversions and fob them off as Commodore games.

A horrid mish-mash of garish backdrops and sprites are complemented by slow and very jerky scrolling and a good dose of colour clash.

The difficulty induced by the slow action and poor graphics is an immediate repellent.

If you ignore all its faults, there are nine levels of play ahead.

A great idea let down by appalling movement, abysmal sound and unfriendly presentation.