The Butler did it!

Did what? Oh.. just two of the best selling arcade conversions ever… Gary Penn talks to one of Britain's lesser known programming talents Chris Butler.

Well, Chris, when did you start programming the Commodore?

At Alligata. As soon as realised that the BBC market was virtually dead I started writing for the Commodore, 'cos that's a 6502 and I know 6502 like the back of my hand at the moment. My first Commodore game was Hypercircuit and that took about four months to write — it was based on Transistor's Revenge, one of my first BBC games. I started writing Z about the middle of '84 end I finished about four or five months later. 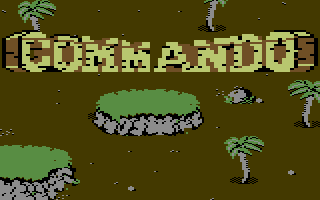 What about your move to Elite?

Well, after I left Alligata — they basically made me redundant because they couldn't afford to pay my wages anymore. So I wrote a few letters around and had interviews with people like Ocean and Activision — and then Elite who made me the strongest offer, so I decided to go with them. Then, shortly after I joined them, I was told to write Commando which took about eight weeks to write. It was a real rush job because I started it in October and it had to be finished by November. It was a bit messy because I had so little time and it was the first time I'd split sprites.

Yeah, what with the main character disappearing ever so often... What happened to level three?

Well it was all in there — you know, the game was completely finished — but when Rob Hubbard came down he said that he needed about 6K for the music, and there wasn't room. So Steve Wilcox, the man, said, 'Right hack out level three.' It was more or less a disaster, but considering it was eight weeks work I don't suppose it was too bad. It made Christmas number one, and it made me a small fortune.

Did you think our review of Commando was fair?

Um — well, a little bit below what I expected. I mean — I certainly didn't expect to get a Sizzler or anything. I don't think the program was too bad — there were a lot of bugs ... the gameplay as well ... I just didn't have time.

Yeah, I was pleased with the review. 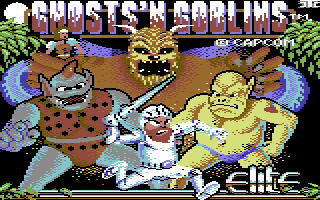 I think that's the best game I've written to date — mainly because I had so much more time on my hands. I spent four months writing the game ... well, actually five months from start to finish, because I took a month off because the equipment broke down.

Are you just going to stick to doing arcade conversions?

Well for the next one, certainly. I'm quite happy doing arcade conversions, it's dead easy work. You've got a set target to reproduce an exact — or a near exact — copy of a game.

What, Elite are going to have a special hardware add on to mimic the hydraulic movement of the original?!

Yeah, have a robot arm to plug into the joystick port ... next question...

OK, what annoys you most in the industry?

Er... no! Commando wasn't a bad game I suppose. It was well hyped though, it was probably the hype that made it sell — well, probably the name itself. Yeah, I think Bombjack was the same.

So what exactly do you class as a bad piece of software?

Frankie Goes to Hollywood is pretty grim — that was a good example of a bad program that was well hyped. That's one thing I can't stand in this computer industry, and that's bad programs which are well hyped.

Is there any existing 64 software which you'd like to improve upon?

Um ...there are a lot of good ideas that aren't put into practice good enough, but I can't think of any off the top of my head. Actually, one thing that did piss me off when I had my own company was distributors — they can be a real pain in the neck.

What about the condition of the industry itself?

It's OK. The lifeblood of this industry is the programmers, though, no matter what any big company director may say. The lifeblood is good product at the end of the day. Nowadays a good programmer has to sign himself to a large software house. The programmers make a bit of money, but the software houses make a hell of a lot more money for actually doing sod all, really. I mean, marketing is nothing. Anyone can pick up a phone and place adverts in a magazine.

Guardian, for its time, was a good game — Mercenary was good, I enjoyed playing that. That's about it, really.

I would like to, yeah, but the thing is that so much work is involved in writing an original game — it's not just programming, there's actual game design as well. And games design is one of the things that I'm not very good at.

How do you see the future of 64 software?

Well the graphics limitations of the 64 are coming into reality now, so more and more we're gonna have to move onto original ideas rather than graphic techniques, which is what I'm good at at the moment. I mean, we've done things like splitting sprites and putting sprites in the border there's not a lot else we can do. At the moment I think we're stretching the 64 to its limits. I know people said that a year ago, but now we probably are. Space Harrier certainly will be stretching the 64 to its limits — why do you keep sniggering every time I mention Space Harrier?

Well it's just the thought of all that stuff being crammed into the 64 — you're going to fill at least 64K with graphics, and then find you've got no memory left for the game...

I'll be using character graphics rather than sprites, and that should save a hell of a lot of memory.

Won't that slow down a lot, though?

Ah — no. If Encounter can do it, I'm sure I can. The Commodore 64 isn't too bad at timing, you know, even with the scrolling. I mean, you're shifting around 2K of memory every fifty Hertz — even with decent sized character sprites you're not going to be touching 2K, so I should be able to do it.

It's... OK — teaboys getting tied up and dumped in cupboards ... there was a lot of messing about, but Brian Wilcox decided to send everybody home to work freelance. I don't blame him, personally.

Are you musical at all?

No, I'm not a musical person at all. Graphics I'm good at, but music and game design ...

Are you impressed with the standard of music on the Commodore?

Considering it's probably got the best music capabilities of any home computer, excluding the 16 bit stuff... it's not bad at all.

Er, Martin Galway and Rob Hubbard. I like the Commando music — 12 inch remix of the arcade game. Rambo's not bad — it's a bit more melodic than Rob Hubbard's stuff, his is sort of 'disco dance music' — you could almost get down to it.

What do you think of this current spate of game and film tie-ins? Do you think its a bad thing?

Well it's certainly not a waste of time, I mean it sells games. It's a bit tough — you have to try and fit in an original game.

I wouldn't really want to, no. But, you know, unless it was purely for financial gain then I would.

Are you purely a financially orientated programmer then?

Um (laughs) — finance is an important part of my life, but success is more important to me.

What do you define as success then? A picture on the inlay? Getting interviewed in Zzap!?

Well you're not exactly a face that everyone recognises... Have you ever written a game which isn't derivative in any way?

Er, not completely original — well, I suppose Hypercircuit was fairly original, I mean, that was a copy of an original game which I originally wrote — Transistor's Revenge. The idea was fairly original, even though it a was a rip off of Tempest. Hypercircuit was the next step on from Transistor's Revenge. That's probably the most original idea that I've ever had, you know, blasting around inside a microchip or whatever. Z was just a copy of various arcade games rolled into one. After that... it's just been pure arcade copies.

Are there any programmers that you admire?

Archer Maclean is a good programmer. Steve Evans is good. Braybrook ... I'm not sure about, his games look good but... I dunno... Crowther's a bit past it. Paul Woakes is good, but he's a bit of black horse.

What's Commando II then? Is it based on an arcade game?

Er, I dunno, I don't think so. I know what Airwolf II is, though.

Yeah, but I can't say anything about it.

Do you have any influences? — and don't say alcohol.

Yeah, his stuff's super smooth, heavy on the special effects.

Do you ever have any major programming problems?

Are you interested in the 16 bit machines at all?

Only if they take off. I'II only write a game if it's going to sell well, I wouldn't write a game solely for the pleasure of writing a game. I'm a commercial software writer, full stop, there's no doubt about it.

Are you pleased with the games that you've written? Do you play them? Are you any good at them?

So even though you program purely for monetary gain, you still take pride in what you're doing?

Yeah, I'm proud of what I've written so far. If I was being paid the right money I wouldn't churn out crap product, I do what I'm paid for. I wouldn't write a game that I felt I wouldn't enjoy writing, though. I've been offered several games which I've turned down flat, whether they would be a success or not, just because I wouldn't enjoy writing them. Elite wanted me to write Buggy Boy, but that didn't interest me at all. If I see an idea for a game that I'd like to write, then I'd go for it in a big way.

I heard that Elite are doing that two player Commando game, ah, Ikari Warriors. Didn't you fancy that after writing Commando?

I was never offered it.

I'd like to write Sinistar, cos that really freaked me out when I saw that. The program itself is a doddle to write, but it's so atmospheric. I remember when I first played it, it was when I went for an interview with Imagine software. They just left me in arcade for half an hour, so I shoved ten, twenty pee in this arcade game not knowing to expect.

What inspired you to apply for a job with them?

There was a TV Eye program on them where they claimed that Eugene Evans was like, earning 35 grand a year. And I thought, 'Oh yeah, that'll suit me,' so I wrote off to them, and they said, 'Yeah, yeah.' So I went up there and said, 'What kind of salary are you going to offer me?'And they said, 'Five grand.' I could get more by working in a bank in Southend!

Is there any particular question you'd like to be asked before you go?

Er, no, not really. Look, must be oft now, got a long swim ahead — SPLISH! 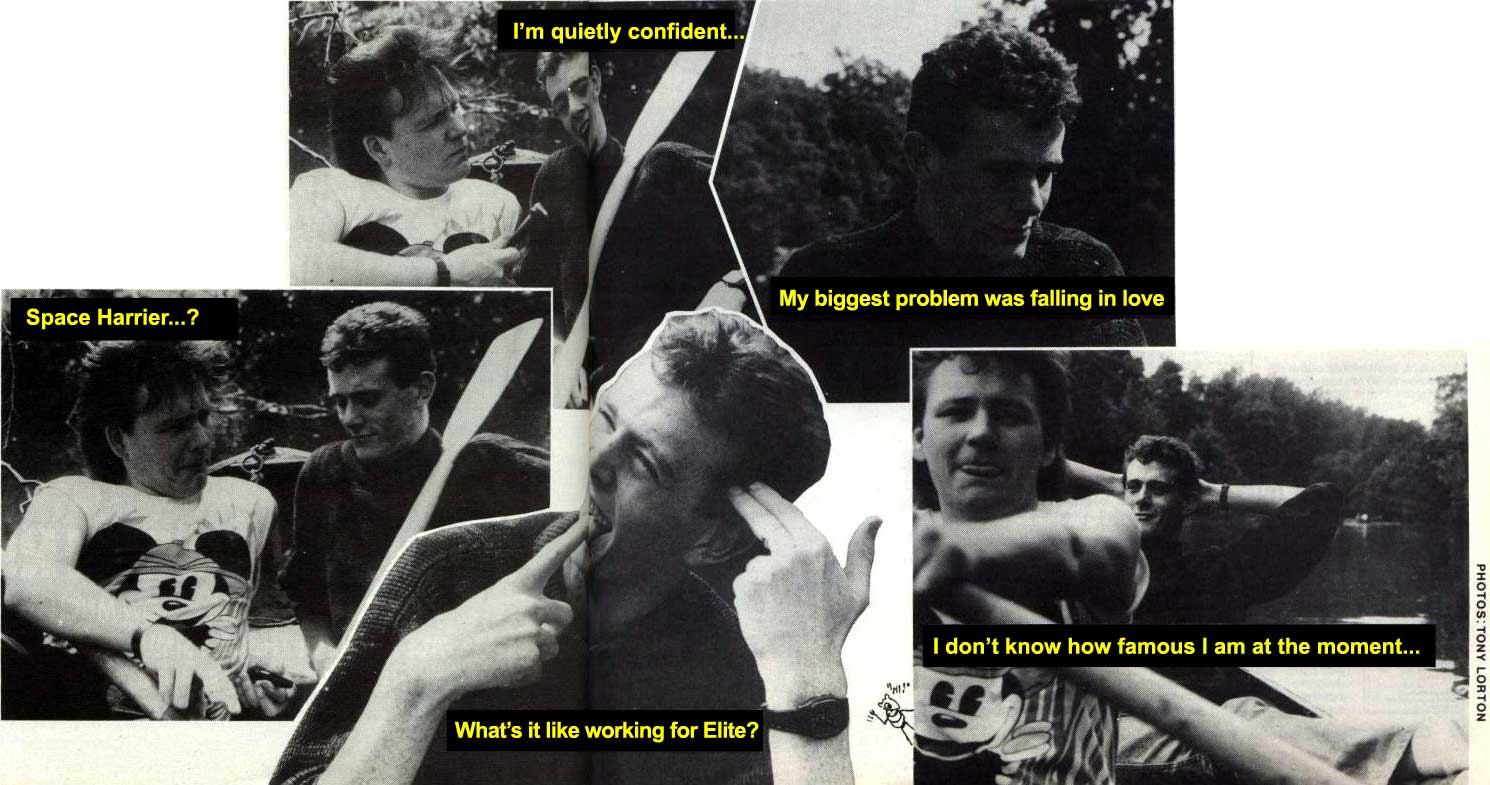