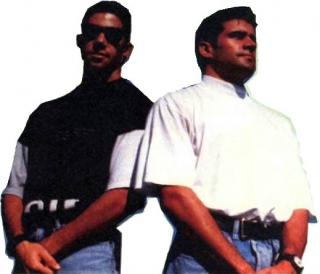 John (left) handles the programming while Steve (right) is the sound and vision man.

Mayhem in Monsterland is going to be huge. How do we know? Because it's being written by John and Steve Rowlands, the team behind the awesome Creatures 1 and 2. In a CF exclusive series over the coming months, the lads are going to reveal, step-by-step, exactly how the game is taking shape, from the initial idea to the final product...

Ever wanted to know how games are created? Then you're in the right place. Y'see creating games is what we do for a living. Let's get the introductions out of the way. We're Steve and John Rowlands otherwise known as Apex Computer Productions. You might possibly have heard of a couple of the games we've written: Cyberdyne Warrior or Creatures 1 and 2, perhaps?

We also wrote the Clyde Guide for CF a year or so back. That was a day-by-day diary which followed the progress of Creatures 2 (the hero was called Clyde, you see). This time things are going to be different. Not only will we tell you what we do as we work on our latest epic, we'll also tell you why we do it. This instalment has been scientifically formulated to inform, inspire and educate, without bleaching colours (even at 40 degrees).

From the start we wanted to make the game console-esque, aiming for high playability as well as amazing aesthetics. It's going to be platform-orientated, like the majority of console games, but with speeds not yet witnessed for platform games on the C64 (we hope). We've learnt from Creatures 1 & 2 that cute games can be successful, so naturally we decided to make this game cute as well.

From the beginning we wanted to incorporate elements from the best console platform games, as the C64 has no games of this type (no good ones, anyway). But before we got carried away with the design we had to take into account the limitations of the C64.

The first thing we decided was how the screen should be updated. The easiest option is to have a flip-screen format (as with Cyberdyne Warrior), but this limits the gameplay considerably (as with Cyberdyne Warrior). The most obvious decision is to scroll the screen. A conventional scroller, which most games use, has a few limitations; the amount of colour that can be displayed, the size of the scrollable area and the speed at which that area scrolls. We opted for the Creatures scroller which would need to be adapted considerably to suit the game design, requiring a bi-directional scrolling playing area with variable speeds! (That means it'll scroll up and down as well as side-to-side).

Once this basic design was finalised we had to consider the look of the game. Graphics are not only there to look good, they also provide atmosphere. The graphics in Mayhem are more important than any of our previous games, as they are essential for establishing certain moods throughout the game. We wanted to make the graphics as bright and colourful as possible but we also wanted to come up with a different graphic style to anything we'd done before. So after a few (very) late nights we had a dozen sketches on which Steve could base his level graphics. Now we had a rough idea of what the graphic style was, we set about designing the player...

The next step is designing the player's character. We started designing the main player by sketching out ideas and messing around with the sprite editor for a few days. We had to decide on the sprite specification, whether it would be a single, multicolour sprite (like Clyde in Creatures), a multicolour sprite with a hi-res overlay (like the players in Cyberdyne), or a larger player with several sprites bolted together. The problem with having a large player is that it would:

Detail is probably the most important factor for a character in this sort of game, and using a multicolour sprite with hi-res overlay would give us the detail we required and enough free sprites for bad guys. So once we knew how the player was structured, it was off to the drawing board to try and come up with a decent character. As the game is set in the Mesozoic era (that's when dinosaurs lived to you and me) he had to be a dinosaur. He is, in fact, a baby dinosaur named Mayhem - hence Mayhem in Monsterland. During the game he will be able to charge at other monsters to kill them, and therefore needs some sort of weapon. We can't really give him a 'Maser Staser Phaser Laser' (© Rob Ellis), as it has to relate to the game. Therefore we gave him a horn with which to impale his adversaries, with the ability to crush monsters to death at slower speeds. As with most of Steve's graphics, he was designed on paper and then recreated on the C64.

We now had a character which was cute yet intelligent, fast yet precise, powerful yet nimble, sexy yet... erm... anyway, he looked good!

Mayhem in Monsterland wasn't the only game idea we considered as a follow up to Creatures 2. Here's some of the others and the reasons why we didn't develop them:

This was a game which we designed three years before Creatures, and was in the playable demo stages before we decided to abandon the project (because of the technical limitations of the C64). Since its initial design we've developed it into an awesome game, which is unfortunately just in our heads. Ho Hum. Look out for it on a more powerful machine in the future. Virtual Reality would be nice.. 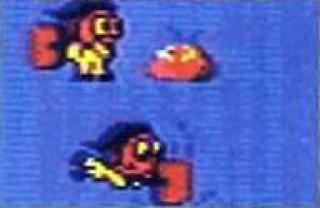 Have mallet, will Squish. Nice idea - difficult to flesh out.

This was a game which we designed two years before Creatures 2, and was a four-way scrolling isometric 'go around squashing things with a mallet'-type affair. The idea behind this was to colour tiles by squashing baddies, their blood changing the tile's colour. The game had a good violence factor, but the idea was dropped owing to a mental block. 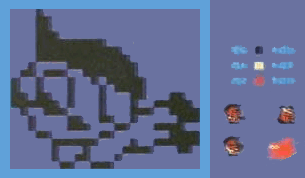 Katapult Kidz - an early idea for the new game that was ultimately shelved.

Designed at the same time as Squish, this was a horizontally-scrolling arcade adventure based around two pranksome schoolboys armed with catapults. These schoolboys were based on the characters from Squish, H2O and Destruction Brothers as we thought that they were cuter than a really cute thing on national cute day. This was axed from the Apex schedule to make way for Creatures 2 (out now on cassette and disk). 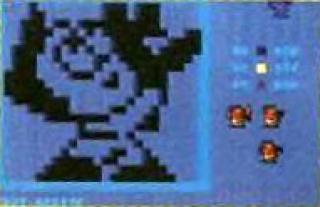 Destruction Bros would have to have been a cartridge game.

Planned for release on cartridge, it was scrapped owing to the dwindling cartridge market. The game was to feature super-bitmaps, a 128 sprite multiplexer, and a pseudo eight-voice sound engine... OK, we're dreaming again. Seriously though, would have featured simultaneous two-player super-weapon-wielding action. Basically it was the bee's knees — all six of them. 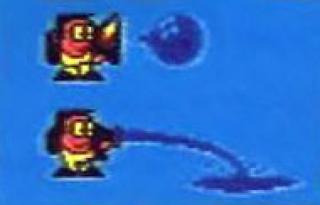 The game that would have made water pistols dead trendy — but H2O just didn't prove practicable to develop.

After the Destruction Bros were rubbed off the drawing board we opted for a slightly less violent games scenario. The main character in the game was based heavily on the Destruction Bros characters but without the fire power. This time he had a big water pistol (honestly!) and he used it to extinguish hundreds of fires. The main reason for scrapping this design was that after the freshness of the idea had worn off, the game wasn't as practical as was first thought.

The main character was a cute baby dragon named Theo. whose parents were brutally slain by merciless villagers in medieval times. Theo would progress through villages crushing castles, torching knights and generally dishing out justice (in quite sizeable portions). It was scrapped to make way for... Mayhem in Monsterland (da-daaa!).

NB: All the above characters, graphics, names and game designs are copyright © 1992 Apex Computer Productions. So there!

We're back in four weeks with a ticket to Scroll City, Arizona - and we haven't even told our parents what time we'll be back! So with production actually starting on the game next month, the diary will be in a more chronological format (CF?). This instalment was brought to you with the divine assistance of Andy Roberts and regular Chinese take-outs.