Month three in the making of Mayhem in Monsterland, and the Apex Boyz, Steve and John (the brains behind Creatures 1 & 2), run into their first real problems. Redesigns ahoy...!

Happy New Year and all that malarkey. Seems odd saying that as we're still in October. Never mind, you'll read about our (bound to be massive) New Year's bash in dull old March (hee, hee).

So what have we done this month? Well, we've had to decide what sort of status panel we want to use in the game — you know, the bit with all the info that you need to know how well (or badly) you're doing. With the playing area taking up the entire screen and scrolling left and right we can't really make the status out of the characters — not only would they take up valuable screen space, but they would also scroll along with the screen. So the status information is going to be built up of sprites (as with both Creatures and Retrograde).

The first thing to consider is where to put it on the screen. At the top or the bottom? We have to bear in mind that the sprites that will be used for the status will also be used for the bad guys. In other words they can't share the same part of the screen. So if we position the status at the top, no baddies can walk or fly around up there. If we position it at the bottom no baddies can go there either.

In the end we decided to put it at the bottom. Baddies walk on top of platforms, so if we make all the platforms at the bottom of the screen thick enough, we can insert a status strip in this small space (as with Creatures). 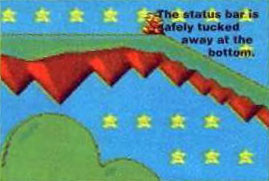 The status bar is safely tucked away at the bottom

JOHN: I've been coding some of the status-area display routines this week. As the C64 can only display a maximum of eight sprites in any one horizontal strip of the screen, we're slightly limited with the amount of information we can show to the player. The game's playing area is the entire height of the screen, and we want Mayhem to be able to move around in the entire height of the screen as well — which includes the part behind the status area. As Mayhem is two sprites the amount of status sprites we can use is now limited to six. So we have to decide what information is essential to the game. Score and lives are the obvious ones, but we also want to put in a star count. Stars are spread throughout Monsterland once Mayhem has transformed it from sad to happy, and Mayhem can pick these up for extra points and lives.

Now we know what is to be included in the status, we have to figure out a way of displaying it which will be easy to read. Don't you just hate playing games that have overly complicated status panels? Especially if you lose a life because you didn't see the bullet that killed you, as you were too busy searching the status area for some info. We'll put Score on the left, Lives on the right and Stars in the middle. Simple and effective.

The various fonts for Mayhem in the order they were designed

STEVE: Finally I've finished the game font I started last month. There is, however, a slight problem. When we put the font in the game and printed a few words on screen, we didn't like it. So on to the next character set, which will have a reflection as well. The letters will be made from the same two by two characters, but with an extra two underneath for the ripples. This will use a lot more character set memory, but with luck will be worth it.

The novelty of designing fonts has worn off a teensy bit so it's time to take a break (sounds like a good slogan for a confectionery advert).

I'm going to design some level maps using those graphics based on geometric shapes I described last month. I've come across a problem, though. Simply put — I'm running out of graphic space in the landscape designer. The only way to get over this is to kick John's butt so he'll change his map editor to cope with the amount of graphics. We expected this to happen and it will not be the first time I will have to wait for a new editor before I can carry on. 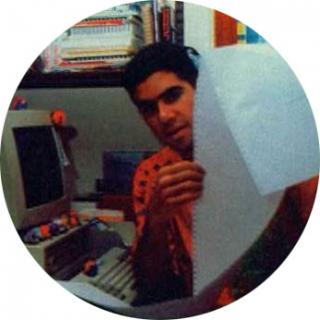 JOHN: Andy Roberts came down this week and saw the game for the first time. His first reaction was that it was a little too similar to some console platform games. The three of us sat around and discussed (argued) whether it was or not, ending up with us going out and buying a Super NES to compare games. The decision is that Mayhem is NOT too similar, and, in fact, has far more originality.

Anyway, away from the research and back to programming. I've decided (well, Andy talked me into it) that it's time to create a temporary Get Ready screen. This would give me a chance to test our ripple-font idea and let me do some presentation routines (which I haven't done for months). By the end of the week I have a screen of text, complete with reflections rippling away under each letter. It looks okay, but not quite how I imagined. Not that I'm saying it's rubbish (well, not much), it's just not as fabbo-brill as I thought it would be. Boo hoo.

STEVE: I now have a suitable map to give John to put in his version of the game. This is the first real look and feel we have had of things to come in Monsterland. The map has a few bits of background and some pretty slopes for John to use in tests when the code is written (which he should start next week), but I think the graphics could be happier. I've already started sketching some smiley flowers.

It took a long time to get the ripple font finished but we don't think we can really keep it in the game. So guess what? I'll have to design another one. This time, though, I've had a good think and will do the font in lower case letters to hopefully give it a more cute look. In fact, this new one is a tiny bit similar to the Creatures 2 font.

A day and a half later and all is complete. The new font is voted by a majority decision the one that'll stay in the game (that is, until we change our minds).

JOHN: The next major parts of the game to be coded are all the slope routines which will enable Mayhem to run up and down the slopes of Monsterland. One of the differences between Creatures 2 and Mayhem in Monsterland is that Clyde moved over a stationary screen at a constant speed whereas Mayhem moves over a sideways-scrolling screen at eight different speeds. So the slope routines in Mayhem are going to be a lot more complex. I've decided that I'll complete all the routines for platforms which slope from the bottom left to the top right, then duplicate or modify them for slopes in the opposite direction. 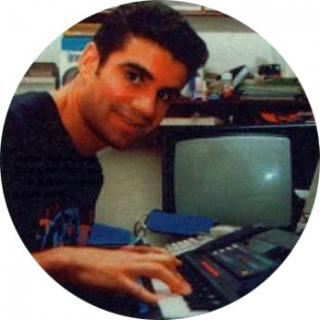 Steve's more the arty type, and this month has been a redesign nightmare

The first problem I've encountered is to do with Steve's design of the graphics - they're useless. Seriously, though, they look fine, but can't be used in their present form. For me to physically move Mayhem up a slope I need to check for special 'control characters'. Each character would have a specific function, but must also look like it's part of the slope. Steve didn't realise this and has gone ahead and designed the slopes so that they look the same, but are built up of the control characters that I'm programming Mayhem to look for. Sorry Steve (chuckle).

STEVE: This is not going to be fun. Re-doing all those slope characters is going to take ages. Thanks, John, for telling me this when I had finished the slopes. This means that I can't just design a nice-looking slope as I normally would — I will have to work to strict parameters which restrict where I can place characters. It's a bit of a downer but it has to be done. So six hours later and all is well with the slope characters (hopefully).

I've had a good idea for a new level. With the lack of 'loadsacolour' in the last one, I decided to brighten things up a smidgen. This land has started off with some well shaded tubes which range from grey to purple to pink and to yellow with jolly spiffy effects (you may get to see them next month). Andy Roberts is still about (we're so blessed, favoured, fortunate, etc) and he has been offering his invaluable (?) assistance with pointers on how to make the graphics look better. 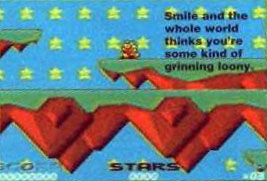 JOHN: Starting the week with a hangover from hell after some serious partying at the weekend it's time to wave a fond farewell to Andy and get back to writing Mayhem. The slope routines are finished (fanfare)! Mayhem can walk up and down any slope of any length at any speed. As the game only scrolls left and right (and not up and down) this wasn't too difficult to achieve. One thing that does look cool is when Mayhem charges at full speed across a series of little slopes, hugging them as he moves up and down.

STEVE: That was one party to remember (apart from the bits that seem to have gone blank). Back to work now with more bits on the newly named Pipeland. I'm adding even more colour to it in the form of rainbow platforms which are not only horizontal but vertical as well. I've also put some nice diamond chequers in the background which make it look a lot more console-esque. They happen to be in three assorted hi-res colours amongst a plethora of multi-coloured graphics on a full screen scroll. I love these near limitless boundaries (compared to other C64 games) that John can give me.

The Def Guide to C64 Graphics

Have any of you ever played a game and thought "I could do better graphics than that"? And then sat down and found it harder than you thought? Well, have no fear cos Apex is here. We've complied a few tips on how to create different styles of shading on your trusty C64. So boot up your graphic editors and read on...

Join us next month when we find Steve skipping merrily towards Pipeland. meeting a few more new monsters along the way, while John is left cautiously playing with Mayhem (oo-er).