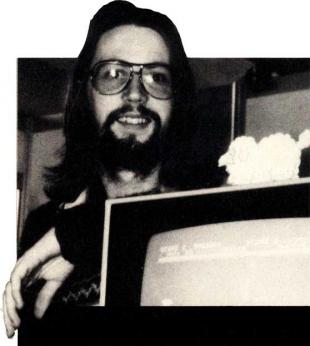 We had to miss out part two of the Daily Llama (Jeff Minter's diary of his latest game, IRIDIS ALPHA), last month because Jeff took an unscheduled holiday (at least, it wasn't on our schedule)! So we pick up the trials and tribulations of everyday programming life not where we left off, with the Hairy Yak off to the Clocktower, but somewhere in France.

Settled in here now. Found an ace black run today, you can go for a whole side of Genesis down it without stopping, but on the second time down I hit a tree stump protruding through the snow, and did an un intentional flying-Yak bit, and landed on a part of my anatomy I'd rather not have landed on. Fired up the 128, finished the Mushroom planet and designed one more, then did a nice fade between planets routine.

Cloudy weather — makes skiing hard coz you can't see the bumps. Wrote sonix driver and started to phase in some of the FX for walking, jumping etc.

Still cloudy. Some snow. Had to buy crappy, French headphones to replace my excellent Sony pair that I knackered when I got them tangled up in a chairlift, dammit! Extended the sonix driver and did a few more FX. Sonix take ages, lots of messing around to do before you get it just right.

Piste all day, back for more SFX, had to rearrange the interrupt sequence to get it all to fit in the frametime.

Excellent day — bright sun, good snow, didn't start work till late coz I went on skiing so long. Wrote module to link 8 sprites reserved for 'enemy ships' to planetary motion, and also give them each independent velocities. Did a little work on the Pause mode when I got back from the bar.

Really bad weather, horrible snow that's nearer rain and so sticky you need to be standing on a near-vertical incline before you even start moving. Hit the bar early, then back for mega Guardian session, then a little more work on the pause mode.

REALLY crappy weather. Got soaked skiing, thawed out in the bar. Retired to room to think about the alien control system while listening to 'The Wall'. Planned it out on paper ready to code later. Got a neat idea for Phase II of the game, thinking along the lines of Batalyx Subgame 1 crossed with a sort of overhead view vertically-scrolling Marble Madness track. Finished off the Pause mode after evening bar. (This'll be the only Pause mode that's been written TOTALLY under the influence of very expensive Guinness). 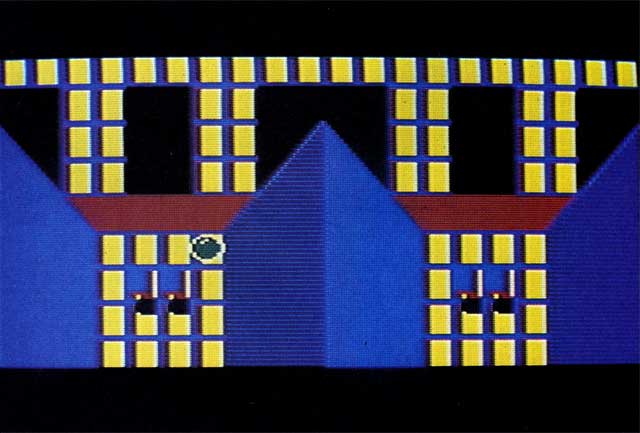 New snow, much better skiing all round. Linked completed Pause mode to rest of game. Started on alien control system. Went down bar and got absolutely smashed and had amazing discussion on Life, the Universe and Everything. Listened to 'Wish You Were Here' at half-3, in the morning... ace!

Skiing OK, came back after full day's pistebashing to do some AC System hacking. Hit a terrible awful bug, ran through the code a million times but not got it yet, so down bar to drown sorrows in copious amounts of Guinness.

Skiing all day then back for the last day's coding in France, I go home tomorrow. Wrestled with the same bug for three hours, was despairing, then noticed a single missing comma in a massive data table that the assembler had neglected, in its infinite wisdom, to flag as an error during assembly, choosing instead to trash the whole data table. Inserted comma; end of bug. Guinness.

Lazy. Didn't do anything, couldn't because me 128 is in France and I need to buy another one, and it's Easter holidays.

Went into Reading to get a 128D, got it, intended to return and dutifully do some work, but instead met some of the Incentive mob, went to pub (fatal mistake for programmers), all ended back in Tadley for mega-Colourspace session, so fat chance of getting any work done there...

Set up new 128D, machine is fine but has a noisy fan and sounds like a small but enthusiastic Hoover. Did a little more work on the ACM, not much mind you.

Went up to London to see Ariola mob and copped some Amiga stuff off them — EA stuff but not Marble Madness yet — they seem quite keen on Iridis Alpha, especially my ideas for phase 2. 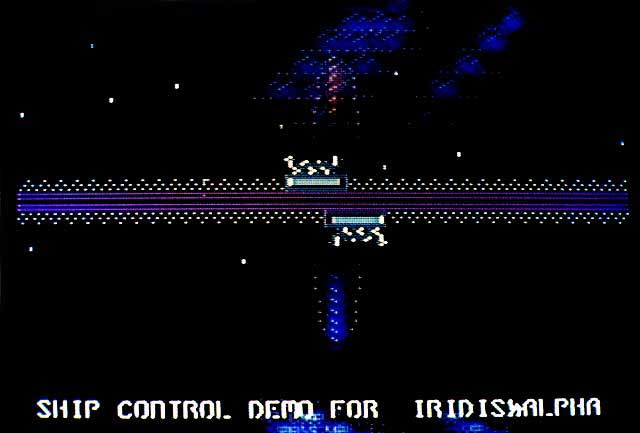 Decided for a break to do a little work on Phase 2 and give Phase 1 a rest. Started at 11 am, finished at 7 am next morning, with a LOT of work done.

Lots more work done today, I now have a tidy little demo of Phase 2, including complete control system and scrolling background in four different colourschemes, and all inertia routines working. Not bad for a couple days' hacking — got to bed early tonite, 6am!

Started to get a little sidetracked now, coz I have to get my newsletter done before I go to Lanzarote on Thursday. HAD A MEGA COLOURSPACE SESSION that finished about half-3 then up writing newsletter till 6. One day maybe I get some sleep.

Did a little more tweaking to phase 2, removing the odd bug I'd found. Then finished newsletter overnight.

All day working on lightshow for performance at Clocktower this evening. Went good. Got big cheer for 'Stairway to Heaven', and free beer all night.

Preparing to go away tomorrow. It's a hard life having to keep trekking around to the snow and the beaches, you never seem to get a decent stretch of work done... (hehehe)

Prepared demos to send off to ZZAP! Couldn't get much serious done because I have to cart all my gear up to London tomorrow for CES Show at Olympia, goes on till Thursday! Then, thank goodness, I get a clear run till the Commodore show, I will at last be able to settle down to some decent coding. Holidays and shows are fine but tend to disrupt you something chronic!!!

More thrills and data spills next month as IRIDIS ALPHA hurtles towards the Commodore Show (retrospectively) and Jeff samples the delights of foreign lamb.