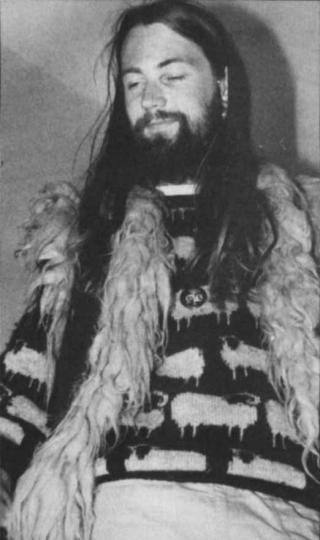 And now, the end is near
And so I face the final curtain
My friends, I'll say it clear
I'll state my case, of which I'm certain
I did it my way...

As I write this, IRIDIS is nearly completed. I just gave the first pre-production prototype to one of the Hewson mob, ready to be duplicated and dished out to the press at the press launch on Thursday. Getting it ready for the press launch has meant a couple of all-nighters over the last weekend, but it's worth it — I got it done, so I'm a hero...

Basically, since last time I wrote, I've been doing Phase II most of the time. I finished off the tricky ACONT routine, and defined the data for all 100 attack waves, then I got down to doing Phase II which was interesting, 'coz it's a vertically scrolling game, and I don't usually do vert-scrollers.

Although I described it before as a loose cross between Phase I of BATALYX and MARBLE MADNESS, it is actually closer to a cross between Phase I of BATALYX and pinball. When you're playing it, you get the odd feeling of actually being the pinball as poor Gilby ricochets off everything in sight at high Delta V. I once saw a pinball game being sold in America which claimed that 'you are the pinball', but when I played it, it turned out to be just a scrolling pin-table, and you were the flippers, not the ball. In Phase II of IRIDIS you are definitely the ball. No doubt about it. And you get hotly pursued by four flying eyeballs. 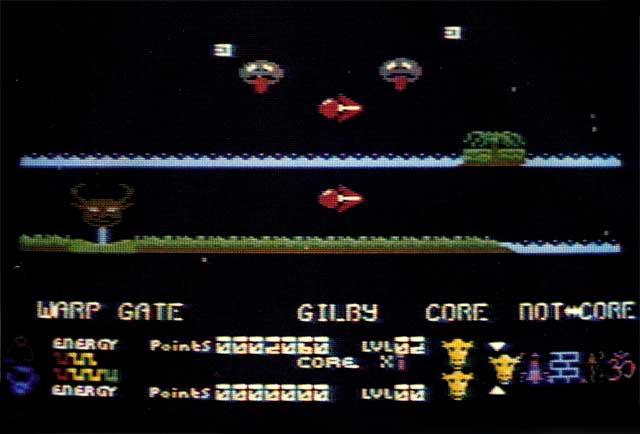 A mutated Gilby is surrounded by enemy vessels.

In Phase II there are 256 possible courses, each one different - I worked this trick by generating each level randomly out of 20 or 30 basic components. But, to ensure that each level would be consistent from game to game, I seeded the random number generator with the level number each time the course gets generated. You get distinct courses for each level, but Level 1 will always look like Level 1, for example, and won't be random every time you go in, so, you can make maps and learn the courses as you play. It's neat, 'coz it looks as if I carefully designed and stored all those different courses, and all I really did was call the ol' RAN$ routine a couple of times. I love cheating.

I've included a neat high score table, and a new system of graphically displaying the player's progress through the game, as well as progressive opening of the Warp Gate as the player's skill increases. The game now starts up with only one planet, so that new players have a chance without it all being too complicated. Once the third wave (Licker Ships — well 'ard) is passed, the second planet becomes available. As the player goes through the game, more planets become available, and he can sustain his game by earning extra lives on Phase II.

I had a bit of room knocking about under the Kernal so I fitted in my DNA demo; it's available from inside MIF (the little pause mode sub-game I wrote in France).

There's also a title page under there, and a twenty-name Hi Score table (full of default entries like YAK, PSY and MAT, RATT, and various other Compunetters)...

All that's really left for me to do now is final debug, tidying up of rough edges, and add a couple of surprises... maybe. I have a week or so to do that, then it's the end-of-July deadline and if I don't make it I get parts of my anatomy chopped off. I'll do it. I'm a hero, like I said, without even playing BIGGLES. 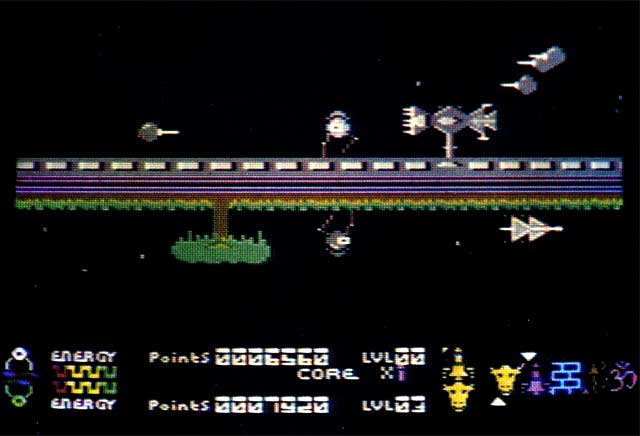 One thing I like about IRIDIS is that it's got very playable, more so than just about any other of my games.

I realised this when I passed the point that comes whenever you write a game: there's always a day when the game stops being just a collection of scroll routines and stuff that you have to run and debug, and starts to become a real game. You know it's happened because you find yourself testing the game even when it doesn't need any testing, and suddenly all your mates know the SYS number to get it started, and use it frequently. IRIDIS passed that point a while back, and it's now well into the 'lights out, heavy rock music on, colour on monitor nice 'n' high, let's go give 'em HELL!' stage. It's great when you've done the high score table and you can rack up a good 'un, too. Remember way back when I started and had nothing much beyond a star scroll, and I said that IRIDIS was gonna blast like crazy? I was right... hehe.

After I've finished, I'm off to Corfu for a couple of weeks well-earned rest doing nothing but parascending, lying on the beach, and getting paralytic at Mrs Platypus's bar.

And playing SATAN OF SATURN, the local video game. And listening to 'Brothers in Arms'.

Finally, then, I will leave you, having chronicled the progress of IRIDIS from conception to birth. If you love a blaster then I think you'll like IRIDIS. It's been heavy work, but ultimately worth it, I think.

Assembled on a C128 using a partially-finished JCL assembler and the horrible, slow Commodore disk drives. Next time I'm gonna use a 6502 X-ASM running in 2.5 Megabytes of RAM on me trusty ST...