The Daily Llama Part 3: ACONT, GENESYS and the CORE 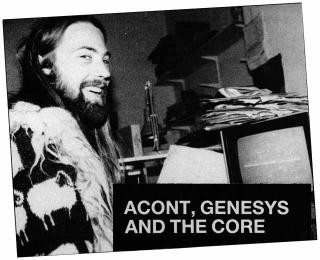 The continuing saga of one man's struggle to get enough interrupt time and not blow the frame sync...

I've decided to drop the individual daily notes for this particular section. I looked at it and there was just too much stuff that was the same on consecutive days, y'know, stuff like May 3: Worked on ACONT. May 4: More work on ACONT. May 5: did stuff for ACONT, etc... etc... What I'll do is try and tell you exactly what's been developed within the game and why it's there.

This is the bit that I knew would take me ages to write and get glitch free, and the bit that is absolutely necessary to the functioning of the game. The module ACONT is essentially an interpreter for my own 'wave language', allowing me to describe, exactly, an attack wave in about 50 bytes of data. The waves for the first part of IRIDIS are in good rollicking shoot-'em-up style, and there have to be plenty of them. There are five planets and each planet is to have twenty levels associated with it. It's impractical to write separate bits of code for each wave; even with 64K you can run outta memory pretty fast that way, and it's not really necessary coz a lot of stuff would be duplicated. Hence ACONT.

You pass the interpreter data, that describes exactly stuff like: what each alien looks like, how many frames of animation it uses, speed of that animation, colour, velocities in X— and Y— directions, accelerations in X and Y, whether the alien should 'home in' on a target, and if so, what to home in on; whether an alien is subject to gravity, and if so, how strong is the gravity; what the alien should do if it hits top of screen, the ground, one of your bullets, or you; whether the alien can fire bullets, and if so, how frequently, and what types; how many points you get if you shoot it, and how much damage it does if it hits you; and a whole bunch more stuff like that. As you can imagine it was a fairly heavy routine to write and get debugged, but that's done now; took me about three weeks in all I'd say.

With ACONT running I had to implement the GENESYS routine, which actually oversees passing data to ACONT, finding out what aliens to unleash depending on what wave we're on and what planet, arranging for shot aliens to be cleaned up and new ones sent out to replace them. I had ACONT running with a limited, one-wave only version of GENESYS at the Commodore show, where a demo of IRIDIS was running non-stop on our stand. I stayed up till three, the morning of the show, preparing a neato title screen with one of my sprite starfields, the game's title and an animated demo, but hardly anyone saw the demo anyway coz they were all playing the game.

I was surprised at the response, after all the thing was only a demo, the scoring was erratic, there was only one wave and you couldn't get killed, but still it was heavily played at the show. People seemed to get into it, enjoying the raw blasting of the thing. One lad even begged to buy my development demo off me, he was just getting off on the blasting and wanted to carry on at home! 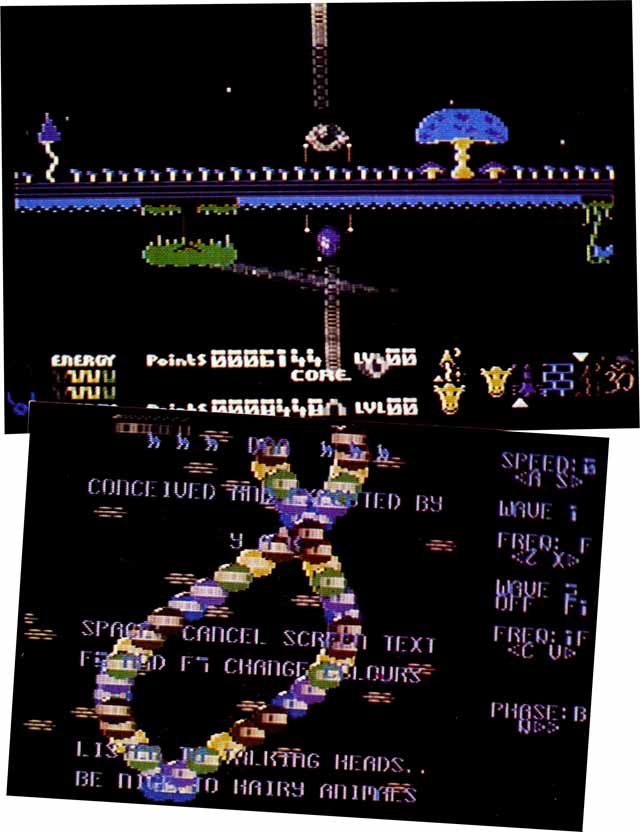 The Commodore show was fun, as ever: I met a lot of good people there, and did some serious partying... I don't think Mat or Psy or Wulf are going to forget THAT night for a while. Everything they say about programmers is TRUE. Make of that what you will.

After CBM was over, I spruced up GENESYS and got it to the point where I could actually start doing the attack waves. That's more or less what I've been doing up till now: designing sprite sequences, flight paths, puzzles in some levels, testing 'em to make sure they are not too difficult for mere mortals. After doing about 40 waves and realising that there's still another 60 to go, 'Attack Wave Fatigue' starts to show up, but you just gotta plug on and get 'em done. At the time of writing this I've done 66 of them. I also did a lot of tweaking to the flight mechanics, and designed the display panel and got its various gauges and meters running.

IRIDIS is unusual in offering two scores, one for each ship. Each ship also has an individual energy bank. As you collide with stuff, you lose energy, naturally. If you lose it all, you DIE. So you shoot some stuff, and as you kill, so energy gets added to your ship's bank. You gotta watch it, though, coz if you collect up too MUCH energy, guess what happens? Yup — you DIE.

Thus, gameplay on IRIDIS involves frequent deliberate collisions, as well as shooting, in order to keep the energy balance cool. There is another way, too: fill up both ships with energy, and then land on the platform (which in the game is known as the CORE). The CORE accepts your excess energy, leaving you with comfortably half-full tanks. Also, if you're copping really heavy flak from a particularly vindictive attack sequence, you can nip along to the CORE and reclaim any energy you might have stashed there during easier times. (Author's note: this new Sabbath album is AWESOME).

Filling up the CORE entirely will grant you a bonus and allow access to Phase II of IRIDIS, that vertically-scrolling thing I mentioned in the last set of notes. You'll have to run the gauntlet of the scrolling course and dump your energy at the end for a mega bonus, then return to main IRIDIS and continue climbing the levels.

Once I finish the attack waves, I gotta tie up all of Phase One before going in to finish Phase II. A rather mean thing is going to be the scoring system — the faster you fly, the more points you get for each killing. Standing still and blasting will earn you no points at all. Flying about at mach III like an F-111 pilot over Libya will net the most points.

IRIDIS ALPHA being brought to you despite the following distractions:

WATCH THIS SPACE for the next instalment of the 'New Iridian'...